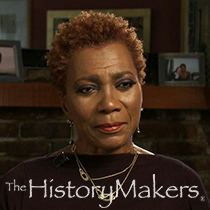 See how Carmen Lundy is related to other HistoryMakers

Jazz singer, arranger and composer Carmen Lundy was born on November 1, 1954 in Miami, Florida. Her mother, Oveida, was the lead singer in a gospel group; her younger brother, Curtis Lundy, is a jazz bassist. Inspired by those around her, Lundy began playing the piano at age six, and started singing in her church choir at age twelve. She went on to attend the University of Miami, where she received her B.M. degree in studio music and jazz.

At the age of sixteen, Lundy began her professional career in Miami, then moved to New York City in 1978 where she worked with numerous Jazz veterans. The following year, she made her first appearance on an album with a group called Jasmine; and, in 1980, formed her own group, performing with pianists John Hicks and Onaje Gumbs. In 1985, Lundy released her first solo album, entitled Good Morning Kiss, which remained at the #3 spot on Billboard’s Jazz Chart for twenty-three weeks. Subsequent records included Night and Day, Self Portrait, Old Devil Moon, This Is Carmen Lundy, Jazz and the New Songbook: Live at the Madrid, Come Home, Solamente, Changes, and Soul To Soul, among others. In all, Lundy has released fourteen albums and has published over 100 songs. Her compositions have been recorded by such artists as Kenny Barron, Ernie Watts, Terri Lyne Carrington, and Regina Carter. In addition, Lundy and producer Elisabeth Oei launched the Afrasia Productions music label in 2005.

Lundy has taught master classes throughout the world, including Australia, Denmark, Russia, Japan, Switzerland, New York and Los Angeles, California, and at the Thelonious Monk Institute of Jazz, and for the Betty Carter's Jazz Ahead Program at The Kennedy Center in Washington, D.C. In addition to being a multi-instrumentalist, she has acted and played the lead role in Duke Ellington's Broadway musical, Sophisticated Ladies, and portrayed Billie Holiday in Lawrence Holder's They Were All Gardenias. Lundy is also a mixed media artist and painter, and her works have been exhibited in New York at The Jazz Gallery, and at The Jazz Bakery and Madrid Theatre in Los Angeles, California.

Throughout her career, Lundy’s music has been critically acclaimed by The New York Times, The Village Voice, The Los Angeles Times, Variety, The Washington Post, Jazz Times, Jazziz, Downbeat and Vanity Fair among many others. Miami-Dade County Office of the Mayor and Board of County Commissioners proclaimed January 25th “Carmen Lundy Day” and she received the keys to the City of Miami.

Carmen Lundy was interviewed by The HistoryMakers on November 12, 2014.

See how Carmen Lundy is related to other HistoryMakers
Click Here To Explore The Archive Today!