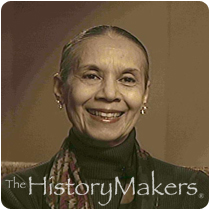 See how Carmen De Lavallade is related to other HistoryMakers

Choreographer and dancer Carmen De Lavallade was born on March 6, 1931, to Grace Grenot and Leo Paul De Lavallade in Los Angeles, California. There, her aunt, Adele De Lavallade, owned the Hugh Gordon Book Shop, one of the first African American history bookshops on Central Avenue. Her cousin, Janet Collins, was the first African American prima ballerina at the Metropolitan Opera in New York City. De Lavallade discovered her talent for dance early. In 1945, she began studying ballet with Melissa Blake, and at the age of sixteen, upon graduation from Thomas Jefferson High School, she was awarded a scholarship to study dance with the renowned Lester Horton.

In 1949, De Lavallade became a member of the celebrated Lester Horton Dance Theater, where from 1950 to 1954, she enjoyed the status of lead dancer. During this time, De Lavallade continued to study dance, becoming proficient in ballet and other forms of modern and ethnic dance. Lester Horton insisted that she study other art forms, including painting, acting, music, set design and costuming. De Lavallade began studying ballet privately with Italian ballerina Carmelita Maracci and later acting with Stella Adler. In 1954, De Lavallade made her Broadway debut in House of Flowers, and that same year, Alvin Ailey, the founder of the Alvin Ailey American Dance Theater, moved to New York City to partner with her in that production.

During that engagement in 1955, De Lavallade met and married dancer and actor Geoffrey Holder. With Holder, she completed her signature solo, Come Sunday, which he suggested choreographing to a black spiritual, sung by Odetta Gordon. In 1956, De Lavallade danced as the prima ballerina at the Metropolitan Opera performances of Samson and Delilah, and Aida. Also in 1956, she made her television debut in John Butler’s ballet Flight, and in 1957, she appeared in the television production of Duke Ellington's A Drum Is a Woman. In pursuit of an acting, Lena Horne introduced her to the executives at Twentieth Century Fox, and between 1952 and 1955, she appeared in several films, including Carmen Jones with Dorothy Dandridge. In 1959, she starred in Odds Against Tomorrow with Harry Belafonte. De Lavallade also appeared in several off-Broadway productions, including Othello and Death of a Salesman.

By the early 1960s, De Lavallade was a principal guest performer with Alvin Ailey’s company and on the company's first European tour in 1962, the billing was De Lavallade-Ailey American Dance Company. In 1964, she danced with Donald McKayle and in 1965 appeared in Agnes deMille’s American Ballet Theater productions of The Four Marys and The Frail Quarry. In 1970, De Lavallade joined the prestigious Yale School of Drama as a choreographer and performer-in-residence. She staged musicals, plays and operas, and later became a professor and member of the Yale Repertory Theater. Between 1990 and 1993, De Lavallade returned to the Metropolitan Opera as choreographer for Porgy and Bess and Die Meistersinger.

In 2004, De Lavallade received the Black History Month Lifetime Achievement Award, the Rosie Award and the Bessie Award in 2006.

De Lavallade was interviewed by The HistoryMakers on December 12, 2006.

See how Carmen De Lavallade is related to other HistoryMakers
Click Here To Explore The Archive Today!