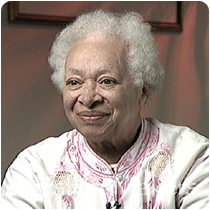 See how Carmel Marr is related to other HistoryMakers
Donate Now

After a period in private practice she was appointed to the United States Mission to The United Nations as a legal advisor in 1953. Marr joined Dr. Ralph Bunche, Marion Anderson, Robert L. Brokenburr, Dr. Channing Tobias, Frank Montero, Edith Sampson, Charles Mahoney, and James Nabrit as African Americans associated with the United Nations in its formative years. Marr served as senior legal officer to the United Nations Secretariat from 1967 to 1968, during which time she wrote a book on United Nations procedures. Appointed to the New York State Human Rights Appeal Board in 1968, Marr was the first black woman appointed to the New York State Public Service Commission as a regulator of utilities. She served as chair of the advisory council to the Gas Research Institute from 1979 to 1986, chairperson of the United States Department of Transportation’s Tech Pipeline Safety Standards Commission, 1979-85, and chairperson of the National Association of Regulatory Utilities Commissioners, NARUC, and Gas Committee, 1984-86. Marr was also president of the NARUC’s Great Lakes Conference of Public Utilities Commissioners. She was an energy consultant until her retirement in 1990.


Marr, honored on numerous occasions, volunteered for many organizations including: Friends of the Billie Holiday Theatre, the National Arts Stabilization Fund, the Brooklyn Society for the Prevention of Cruelty to Children and Alpha Phi Alpha. With her husband, Warren, she was intensely involved in the Amistad Research Center, which he co-founded in 1976. Marr was president and chair of Amistad from 1982 to 1995. The Marrs, lived in Valley Cottage, New York, and had two adult children, Warren Quincy Marr III and Charles Carrington Marr.

See how Carmel Marr is related to other HistoryMakers
Donate Now
Click Here To Explore The Archive Today!