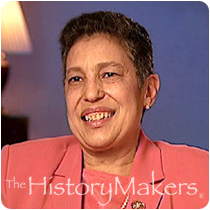 The oldest of three daughters, Carlotta LaNier was born on December 18, 1942 in Little Rock, Arkansas to Juanita and Cartelyou Walls. LaNier (then Walls) made history as the youngest member of the Little Rock Nine, those nine courageous African American students who integrated Little Rock Central High School in 1957. The world watched as these children and their families braved constant intimidation and threats. This defiant act followed the U.S. Supreme Court ruling in Brown vs. Board of Education.

Inspired by Rosa Parks and the desire to get the best education available, LaNier enrolled in Central High School. White students called her names and spat on her and armed guards escorted her to classes, but LaNier concentrated on her studies and protected herself throughout the school year. Governor Orval Faubus stopped the public schools from opening in September of 1958, and after a year of closure and controversy, the schools re-opened in 1959. LaNier returned to Central High, graduating in 1960.

LaNier attended Michigan State University for two years before moving with her family to Denver, Colorado. In 1968, she earned a B.S. from Colorado State College (now the University of Northern Colorado) and began working at the YWCA as a program administrator for teens. In 1977, she founded LaNier and Company, a real estate brokerage company. Her experience in real estate extends from constructing and remodeling properties to marketing and selling them. Cherry Creek Realtors hired her in 1987.

LaNier was awarded the prestigious Spingarn Medal by the NAACP in 1958. She has been a member of the Colorado Aids Project, Jack and Jill of America, the Urban League and the NAACP and the president of the Little Rock Nine Foundation, a scholarship organization dedicated to ensuring equal access to education for African Americans. She has also served as a trustee for the Iliff School of Theology. In 1999, President Clinton bestowed the nation's highest civilian award, the Congressional Gold Medal, to the members of the Little Rock Nine. In 2009, LaNier completed her book, A Mighty Long Way, a biography with forward by Bill Clinton. LaNier and her husband, Ira (Ike) LaNier, have two children, Whitney and Brooke.

LaNier was interviewed by The HistoryMakers on June 21, 2002.

See how Carlotta Walls LaNier is related to other HistoryMakers
Donate Now
Click Here To Explore The Archive Today!