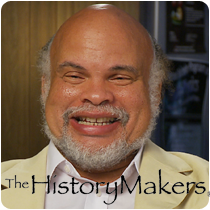 See how Carlos Handy is related to other HistoryMakers

Physicists Carlos Handy was born on October 18, 1950, in Havana, Cuba, to a Cuban mother and an American father. His grandfather, W.C. Handy, is known as “Father of the Blues.” Growing up in New York City, Handy attended George Washington High School where he was a top math student. In 1972, Handy earned his B.A. degree in physics from Columbia College in New York. He then continued his studies at Columbia university, earning is M.A. degree in physics in 1975, and his Ph.D. degree in theoretical physics in 1978.

From 1978 to 1981, Handy worked as a postdoctoral research associate as Los Alamos national Laboratory focusing on the use of moment representations to relate large scale to local scale features of strong coupling problems. A related approach to this led to Wavelet analysis, as developed by others (i.e. Grossman, Morlet, and Daubechies). In 1983, Handy was hired by Clark Atlanta University as an associate professor of physics. During his time there, he received grant money from the National Science Foundation (NSF), which led to his discovery of the Eigenvalue Method (EMM) technique.

Throughout his career, Handy published numerous research articles. The most recent of these was an extension of EMM to determining the symmetry breaking regime of an important pseudo-hermitian system, and application to Regge pole scattering analysis in atomic and molecular physics. His professional concerns include the need for modern facilities in physics education as well as students' early mastery of calculus. Handy works in Houston, Texas.

Carlos Handy was interviewed by The HistoryMakers on August 17, 2012.

See how Carlos Handy is related to other HistoryMakers
Click Here To Explore The Archive Today!