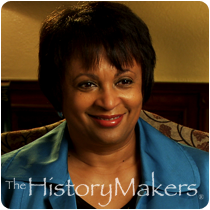 See how Carla Hayden is related to other HistoryMakers

Library Director and Administrator Carla Hayden was born on August 10, 1952. She received her B.A. degree from Roosevelt University and began work as a library assistant at the Chicago Public Library in 1973. She later received M.A. and Ph.D. degrees from the University of Chicago’s Graduate Library School.

She worked as library service coordinator for the Museum of Science and Industry in Chicago and as a professor at the University of Pittsburgh’s School of Library and Information Science. In 1991, she returned to Chicago where she worked as the Chicago Public Library System’s deputy commissioner and chief librarian. She is also the second African American to become the executive director of the Enoch Pratt Free Library, one of the oldest free libraries in the United States.

Hayden was elected president of the American Library Association in 2003. She succeeded in getting Attorney General John Ashcroft to declassify reports on the Act’s provisions and eventually, through her efforts and the efforts of other civil liberties organizations, the section of the Act that allowed the F.B.I. to demand private individuals’ library records was rescinded.

Hayden has continually championed the cause of civil liberties and freedom of information. She spearheaded the A.L.A.’s efforts to overturn legislation that forced all libraries receiving federal funding to install internet content filters on their computers. Eventually the Supreme Court upheld the right of adult library users to request the filter’s deactivation, though they did not overturn the requirement that the filters be installed. Hayden has worked with the A.L.A. to publicize and uphold the right to deactivate the filter.

She has been honored with the Andrew White Medal by Loyola College, the President’s Medal by Johns Hopkins University, and the Legacy of Literacy Award by the DuBois Circle of Baltimore. Hayden was named one of Ms. Magazine’s 2003 Women of the Year and one of Maryland’s Top 100 Women of Maryland. She is also the first African American to receive the Librarian of the Year Award from Library Journal Magazine. She is a member of the Boards of the Maryland African American Museum Corporation, Goucher College, Franklin and Eleanor Roosevelt Institute and Library and Maryland Historical Society.

See how Carla Hayden is related to other HistoryMakers
Click Here To Explore The Archive Today!