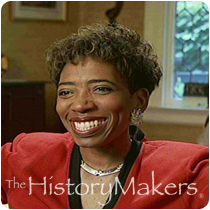 Favorite Color:
Black
Favorite Food:
Hamburgers
Favorite Time of Year:
Christmas, Summer
Favorite Quote:
I Can Do All Things Through Christ That Strengthens Me.

Favorite Color:
Black
Favorite Food:
Hamburgers
Favorite Time of Year:
Christmas, Summer
Favorite Quote:
I Can Do All Things Through Christ That Strengthens Me.

See how Carla Harris is related to other HistoryMakers
Donate Now

Investment banker Carla Ann Harris was born on October 28, 1962, in Port Arthur, Texas. She was raised in Jacksonville, Florida. Harris began singing at an early age, and by the time she was thirteen years old, she was singing in both Catholic and Baptist choirs. After high school graduation, Harris left Jacksonville and entered Harvard University where she graduated magna cum laude with her A.B. degree in economics and received her M.A. degree in business administration from Harvard Business School. While at Harvard, she sang with the world renowned Radcliffe Chorale Society, the oldest women’s singing group at Harvard and in her own band called Rhythm Company.

In 1987, Harris began her career as an investment banker at Morgan Stanley in the Mergers & Acquisitions department. She has become Managing Director in Global Capital Markets for the firm. She is responsible for the structuring, marketing and execution of public and private equity financings. She is also the active chair of the firm’s Private Placement Commitment Equity Committee. And, for more than a decade, she was a senior member of the Equity Syndicate desk, where she executed such transactions as initial public offerings for UPS, Martha Stewart Living Omnimedia, and the $3.2 billion common stock transaction for Immunex Corporation, the largest biotechnology follow-on offering in U.S. history.

Harris has been named by Fortune magazine among The 50 Most Powerful Black Executives in Corporate America. Black Enterprise named her one of the Top 50 African Americans on Wall Street. Essence magazine named her among The 50 Women Who are Shaping the World. Harvard’s Black Men’s Forum named her Woman of the Year in 2004.

As a gospel singer, in 2000, Harris performed a solo concert at Carnegie Hall and released her first album, Carla’s First Christmas. The album was featured on The Evening News with Dan Rather and was one of the top selling albums on Amazon.com in New York City. In 2006, Harris released her second album, entitled Joy is Waiting. She donated the proceeds to two high schools.

See how Carla Harris is related to other HistoryMakers
Donate Now
Click Here To Explore The Archive Today!