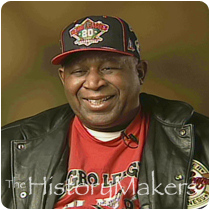 Negro League veteran and African American law enforcement pioneer Carl Russell Long was born May 9, 1935, in Rock Hill, South Carolina. His father William Long was a catcher for the black Rock Hill Blue Jays and his mother Ella Griffin Long operated a laundry business. Long graduated from West End School in Rockville where he excelled at sports. In 1951, at age sixteen, Long was recruited by John William Parker of the Nashville Stars of the Negro Baseball League (NBL). In Nashville, Long was taught to play center field by NBL legend and Hall of Famer, Oscar Charleston. He played for the NBL Black Barons in 1952, where he competed on the field with Willie Mays, Charlie Pride, Ernie Banks and Frank Robinson.

In 1953, Long was signed by the Pittsburgh Pirates organization and hit twenty home runs for Class A team, St. Johns, Quebec. In 1955, he was chosen as the first African American to play for the Kinston, North Carolina Eagles, also of the Pirates organization. Joined by other black players, Curt Flood and Leon Wagner, Long hit 111 runs and made the All Star Team. In 1956, Long married and hoped to be called up to the big leagues. However, he badly injured his shoulder in the Mexican League and never played major league baseball again. Starting as a truck driver, Long worked a succession of jobs including being named the first African American Deputy Sheriff in Lenoir County, North Carolina. In the 1970s, Long was appointed as the first black police detective in the history of Kinston.

The Kinston Indians started celebrating Carl Long Day in 1999. Carl Long Day is a three day celebration of Long and other Negro League veterans. Long, a member of the Negro Leagues Players Association, honored for his youth work and his baseball knowledge, lived in Kinston with Ella, his wife of fifty-two years. He passed away on January 12, 2015, at age 79.

Carl Long was interviewed by The HistoryMakers on November 21, 2005.