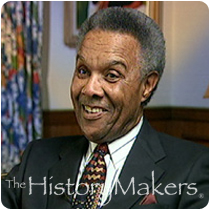 See how Carl Edwin Anderson is related to other HistoryMakers

Student affairs administrator Carl Edwin Anderson was born September 29, 1934, in St. Louis, Missouri. He attended Dunbar Elementary School and graduated from Charles L. Sumner High School in 1952. He received both his B.A. in government in 1956 and his M.S. in college personnel administration in 1958 from Southern Illinois University. Anderson later earned an Ed.D in administration in higher education from the University of Maryland in 1969.

His lifelong relationship with Howard University began in 1958 when he was the head resident of Cooke Hall. By 1960, Anderson was director of student activities and by 1964, he was associate dean of students. In August of 1969, Anderson was appointed vice president of student affairs and as such he developed and administered a broad range of services for 12,000 students, overseeing a of $40 million budget and 400 employees. Anderson also worked as a part time lecturer for graduate and undergraduate level courses in the education department. Serving through the Black Power and Vietnam eras on a college campus, Anderson’s job was often complex. In addition to his professional affiliations, Anderson is a member of the NAACP, the National Urban League, and the Washington, D.C. Board of Education Advisory Committee for Alternative Schools. For over ten years Anderson served as president of the Kappa Scholarship Endowment Fund. From 1991 to 1995, he was a member of the professional staff of the Post Office and served on the Civil Service Committee of the United States House of Representatives.

Anderson is active in a number of groups and organizations, including the Pi Sigma Alpha Honor Society in Political Science, Psi Chi Honor Society in Psychology, and the Phi Delta Kappa Honor Society in Education. He is also the recipient of many awards. Anderson and his wife, Ida, have three children, all graduates of Howard University.

See how Carl Edwin Anderson is related to other HistoryMakers
Click Here To Explore The Archive Today!