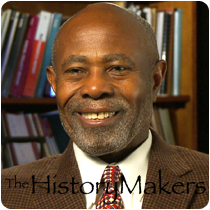 See how Cardinal Warde is related to other HistoryMakers

Engineer and engineering professor Cardinal Warde was born on July 14, 1945 in Christ Church, Barbados to Rosetta Irene Ward. After graduating from high school, Warde moved to the United States and enrolled in the Stevens Institute of Technology. There he played for the institute’s varsity soccer team, and received his B.A. degree in science in 1969. He continued to study physics in graduate school at Yale University. In 1971, Warde earned his M.Phil. degree, and in 1974 he earned his Ph.D. degree in physics. As a doctoral student, he invented a new inferometer with the ability of operating at absolute zero temperature. The device measured the refractive index and thickness of solid oxygen films used for his dissertation research.

In 1974, Ward joined the faculty in the Department of Electrical Engineering and Computer Science at Massachusetts Institute of Technology as an associate professor. At MIT, Warde's interest shifted toward the engineering applications of optics. He became involved with other members of the faculty in the development of devices for enhancing the performance of optical atmospheric (wireless) communication systems to improve communication performance in inclement weather, and on the development of photorefractive materials for real-time holography and optical computing. To date, he has published over one hundred technical papers on optical materials, devices and systems. Warde is also an entrepreneur. In 1982, he founded Optron Systems, Inc., an incubator company dedicated to developing novel electro-optic and MEMS displays, and light shutters and modulators for optical signal processing systems. Then, in 1999, he co-founded Radiant Images, Inc., a company engaged in the manufacture of transparent liquid-crystal VLSI microdisplays for digital camera and camcorder viewfinders, portable telecommunications devices, and display eyeglasses.

Warde is an inventor on twelve patents, and has published three book chapters in addition to over one-hundred-fifty technical papers on optical materials, devices and systems. Warde is former associate editor of the The Journal of Display Technology and fellow of the Optical Society of America. He has been recognized with a number of awards and honors for his work, including the Renaissance Science and Engineering Award from Stevens Institute of Technology in 1996, the Companion of Honour Award (the second highest honor awarded by the Government of Barbados) in 2003.He received honorary doctorate degrees in science from Universidad Carlos III de Madrid and the University of the West Indies.

Cardinal Warde was interviewed by The HistoryMakers on October 11, 2012

See how Cardinal Warde is related to other HistoryMakers
Click Here To Explore The Archive Today!