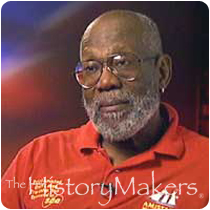 See how Capt. William "Bill" Pinkney is related to other HistoryMakers
Donate Now

The first African American to solo-circumnavigate the world via Cape Horn, William Pinkney was born on September 15, 1935, in Chicago. Attending public schools in Chicago, Pinkney joined the U.S. Navy after graduating from high school in 1954.

After having served for eight years in the Navy, Pinkney became involved in the cosmetics industry, first as a freelance make-up artist, then, in 1973, as a marketing manager for Revlon. In 1977, Pinkney became the director of marketing at John Prod, another cosmetics company. Going to work for the city of Chicago in 1980, Pinkney took a post as a public information officer with the Department of Human Services, from which he retired in 1983.

Throughout the course of his career, Pinkney's real passion remained sailing. Having sailed the Great Lakes and oceans for more than thirty years, Pinkney decided to embark on a solo trip around the globe in 1990. Pinkney's route took him around the dangerous tip of South America, considered to be some of the most treacherous waters in the world; upon successfully realizing his dream, he was honored as the Chicago Yacht Club's Yachtsman of the Year in 1992, and Chicago Magazine named him Chicagoan of the Year in 1999.

Combining his passion for sailing with his interest in history, particularly naval voyages of the seventeenth, eighteenth, and nineteenth centuries, Pinkney's next adventure was aboard the Freedom Schooner Amistad. In January 1999, Pinkney and his crew set out to retrace the Middle Passage slave trade routes; the purpose of the project was to educate people about the original Amistad, as well as about the slave trade and human rights. Pinkney teamed up with PBS and several corporations to create a television special, and to bring teachers from across the country on board en route so that they could experience the trip firsthand.

Pinkney also wrote a first-grade textbook, Captain Bill Pinkney's Journey, which appeared in more than 5,000 schools across the country. Pinkney was honored by senators, former President George Bush, and foreign dignitaries for his dedication to education and his numerous other accomplishments. Pinkney was a trustee of Mystic Seaport, a museum devoted to the history of America's interactions with the sea; and as a director of the American Sail Training Association.

Pinkney and his wife, Migdalia, were longtime residents of Connecticut.

Sponsored by Kirkland and Ellis

See how Capt. William "Bill" Pinkney is related to other HistoryMakers
Donate Now
Click Here To Explore The Archive Today!