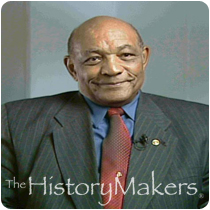 See how Capt. Samuel Saxton is related to other HistoryMakers

Captain Samuel Farlee Saxton was born on August 5, 1929 in Asheville, North Carolina to Mary Patterson and Thomas Odell. Although his father left the family, his mother, a former teacher, worked as a domestic to raise Saxton and his four younger siblings. He attended and dropped out of Stevens High School in Asheville during ninth grade in order to work full time. In 1944, he told the World War II draft board that he was eighteen when he was actually sixteen so that he could join the U.S. Navy. Saxton trained as a steward, one of the few Navy jobs open to African Americans, but served as a gunner during intense battles, including the Battle of Leyte in the Philippines in 1944 and at Iwo Jima, Japan in 1945.

At the end of World War II, Saxton left the Navy and earned his high school diploma. In 1946, he joined the U.S. Marines, training at Montford Point, a segregated facility for African Americans at Camp LeJeune, North Carolina. Rising through the ranks to become a commissioned officer, Saxton served in the Korean and Vietnam Wars. In addition to defending U.S. bases in Korea and Vietnam, he managed military prisons in Da Nang, Vietnam and at Camp Pendleton, California. After a serious car accident in 1975, Saxton retired from the Marine Corps and went on to earn his B.S. degree in criminal justice and his M.A. degree in rehabilitative counseling from the University of Maryland.

In 1975, Saxton joined the Montgomery County Department of Corrections and Rehabilitation in Maryland as a deputy director and was later appointed as the director of the department. Renowned as an innovative corrections administrator, Saxton was recruited to be the director of corrections for Prince George’s County, Maryland in 1983. During his tenure, he created several programs to improve inmates’ living conditions and to facilitate their reintegration into society. His comprehensive drug treatment program, The Awakening, gained national attention and earned a visit from President Bill Clinton in 1994. Retiring from Prince George’s County in 2000, Saxton taught courses in criminal justice at Prince George’s Community College until 2004. Throughout his career, Saxton received numerous honors for instituting prison reforms, including the American Correctional Association's E.R. Cass Correctional Achievement Award and the 1986 Austin MacCormick Award from the Correctional Education Association.

Captain Samuel Saxton was interviewed by The HistoryMakers on November 9, 2006.

See how Capt. Samuel Saxton is related to other HistoryMakers
Click Here To Explore The Archive Today!