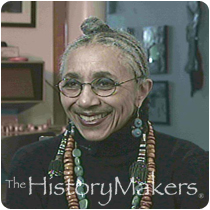 Artist and filmmaker Camille Billops was born on August 12, 1933, in Los Angeles, California. Billops’ career has consisted of printmaking, sculpture, book illustration and filmmaking. She obtained her B.A. degree from California State University as well as her M.F.A. degree from City College of New York in 1975. Her primary medium is sculpture, and her works are in the permanent collections of the Jersey City Museum in Jersey City, New Jersey, and the Museum of Drawers, Bern, Switzerland. Billops has exhibited in one-woman and group exhibitions worldwide including: Gallerie Akhenaton, Cairo, Egypt; Hamburg, Germany; Kaohsiung, Taiwan; Gimpel and Weitzenhoffer Gallery, and El Museo de Arte Moderno La Tertulia, Cali, Colombia. She was a long time friend and colleague of master printmaker Robert Blackburn, whom she assisted in establishing the first printmaking workshop in Asilah, Morocco in 1978.

In 1975, with her husband, Black theatre historian James Hatch, Billops founded the Hatch-Billops Collection. This impressive African American archive is a collection of oral histories, books, slides, photographs and other historical references. Billops also collaborated with James Van Der Zee and poet Owen Dodson in the publication of The Harlem Book of the Dead. In 1982, Billops began her filmmaking career with Suzanne, Suzanne. She followed this promising beginning by directing five more films, including Finding Christa in 1991, which is a highly autobiographical work that garnered the Grand Jury Prize for documentaries at the 1992 Sundance Film Festival. Finding Christa has also been aired as part of the Public Broadcasting Station’s P.O.V. television series. Her other film credits include Older Women and Love in 1987, The KKK Boutique Ain’t Just Rednecks in 1994, Take Your Bags in 1998, and A String of Pearls in 2002. Billops produced all of her films with her husband and their film company, Mom and Pop Productions. They have also co-published Artist and Influence, an annual, in 1981 as an extensive journal of the African Americans in the visual, performing and literary arts community.

Billops and her husband residde in New York City, where they both served as archivists of the Hatch-Billops Collection.