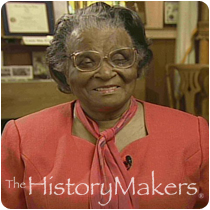 High school math teacher, newspaper columnist, and historian Camilla Bolton Perkins Thompson has distinguished herself as both a science educator and as an authority on the African American history of Jacksonville, Florida. As an African American teacher of chemistry and physics, she was a pioneer for her generation. As a local lay historian, her historical research, writings, interpretation, presentations and organizational activities on Jacksonville’s African American history were motivated by the need to preserve the history for younger generations.

Thompson was born on March 6, 1922 in Jacksonville, Florida. Her mother, Camilla (Bolton) Perkins, was a Jacksonville elementary school teacher, and her father, Daniel W. Perkins, was a prominent lawyer. Thompson grew up in the LaVilla neighborhood of Jacksonville, which was segregated, where she attended a wooden two-story school house. She graduated from Stanton Senior High School in 1939. In 1943, Thompson received her B.S. degree in chemistry from Florida A&M University. In 1974, she received her M.S. degree with a focus on the teaching of chemistry and physics from the University of North Florida.

From 1944 to 1976, Thompson taught chemistry, physics and math at four Jacksonville junior and senior high schools—Abraham Lincoln Lewis Jr. High, Northwestern Jr. High, William Raines High, and Andrew Jackson High School. From 1976 to 1981, she was an instructor of chemistry at Florida Community College. During her teaching career, Thompson was married to Capers M. Thompson and they had three children—Muriel, Michael, and Reginald, born between 1947 and 1953. When Thompson retired from teaching, she was serving on the board of the Clara White Mission. The White family had accumulated a large collection of news articles and artifacts on Jacksonville’s African American life and history. Thompson volunteered to organize and preserve a large collection of historical materials accumulated by the White family.

Over a ten year period, between 1985 and 1995, Thompson wrote a weekly column called “Reflections on Black Jacksonville” for the Jacksonville Free Press. Her more than 500 articles covered people, places, and events in Jacksonville’s black history and culture. She is widely known for her illustrated talks on “Remembering the African American History of Jacksonville from 1925 to 1960."

As chairperson of the Black Historical Tour Committee and as a tour coordinator, Thompson served as a principle figure in the Tour of Black Historical Sites in Metropolitan Jacksonville, sponsored by the Gamma Rho Chapter of the Alpha Kappa Alpha Sorority, Inc. Thompson’s work as a lay historian, researching, preserving, interpreting, and disseminating the African American history of Jacksonville, was a major contribution to historical memory and cultural and educational programs for the City of Jacksonville.

Camilla Thompson was interviewed by The HistoryMakers on October 19, 2006.