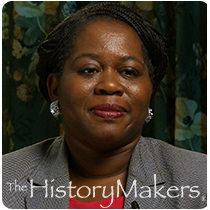 See how Camellia Moses Okpodu is related to other HistoryMakers

Research director and STEM educator Camellia Moses Okpodu was born on January 24, 1964 in Portsmouth, Virginia. Okpodu was the fourth of five children born to Frank Moses, a retired U.S. Navy veteran, and Luerevia Fullwood Moses. She graduated from West Brunswick High School in 1982, and then enrolled at North Carolina State University where she received her B.S. degree in biochemistry in 1987, and her Ph.D. degree in plant physiology and biochemistry in 1994. Upon graduation, Okpodu was awarded a postdoctoral research fellowship in plant molecular biology at the Virginia Institute of Technology. She also received certificates in Documentation and Record Keeping from the BioPharma Institute Program, in Forensic DNA Databases and Courtroom Consideration from the National Institute of Justice via the Forensics Training Network, and in Hazardous Communication from the Occupational Safety and Health Administration.

In 1996, Okpodu joined the faculty at Hampton University as an assistant professor in the department of biology. While there, she served as program director and principal investigator for Project O.A.K. from 1992 to 2002, and as chair of the department of biology from 1999 to 2000. In 2002, Okpodu left Hampton and joined the faculty at Elizabeth City State University where she was appointed to an endowed professorship and served for one year as the chair of the biology department. She then moved to Norfolk State University in 2003 where she was named professor and chair of the biology department. She also served as the director of the National Institutes of Health Extramural Research Office, director of the Intelligence Community Center of Academic Excellence, and as director of the Group for Microgravity and Environmental Biology (formerly, the Center of Microgravity and Environmental Biology).

Okpodu is a member of the Sigma Xi, Beta Kappa Chi, and the American Society of Plant Biology. Okpodu served as a reviewer for the Journal of Applied Phycology, and has published her research in the Journal of Plant Physiology and the Journal of Plant Science. Her academic and professional awards include the Gordon Research Conference Travel Award, the Intelligence Community Faculty Scholar Award, and both the Award of Recognition and the Special Recognition of Merit Award from the Office of the Director of National Intelligence. In addition, she served as a National Institutes of Health Genome Fellow in 2006, an Extramural Research Associate Fellow in 2006, and as an American Council on Education Fellow in 2007.

Camellia Moses Okpodu was interviewed by The HistoryMakers on June 20, 2013.

See how Camellia Moses Okpodu is related to other HistoryMakers
Click Here To Explore The Archive Today!