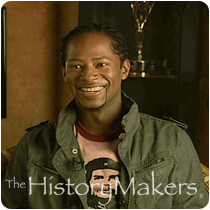 See how Camara Kambon is related to other HistoryMakers
Donate Now

Music composer and music producer Camara Yero Kambon was born on February 4, 1973, in Baltimore, Maryland to Anana Maisha Kambon, a preschool teacher, and Kwame Sietu Kambon, an artist. At the age of two, Kambon started studying drums. He moved to the piano at age four and composed his first musical riffs by the age of six. While living in Baltimore, Maryland, Kambon attended Cross Country Elementary and attended Fallstaff Middle School where he began to play other instruments besides the piano. After graduating from middle school, Kambon attended St. Paul's School for Boys in Lutherville, Maryland. In 1983, Kambon enrolled in the Peabody Preparatory School in Baltimore, studying jazz, classical piano and composition. Kambon graduated from Berklee College of Music in Boston, Massachusetts in 1994 where he studied music production, music engineering and film scoring. While there, he composed music for the Emmy nominated films, Dancing: New Worlds, New Forms and Malcolm X: Make it Plain.

In 1996, Kambon won an Emmy Award for the music he composed for the HBO film, Sonny Liston: The Mysterious Life and Death of a Champion. At the age of twenty-three, he was the youngest composer ever to receive a national Emmy Award. Kambon then became head of Inflx Entertainment, a musical production company in Hollywood, California, specializing in film, television and records. Kambon has worked as the composer for two television series, A Different World and Living Single. He has also worked as a keyboard player for producer and rapper, Dr. Dre. In addition, Kambon composed Korikabaya, which was performed by the Baltimore Symphony Orchestra.

Camara Yero Kambon was interviewed by The HistoryMakers on September 18, 2008.

See how Camara Kambon is related to other HistoryMakers
Donate Now
Click Here To Explore The Archive Today!