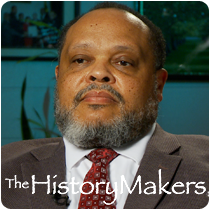 See how Calvin Lowe is related to other HistoryMakers

Education administrator and physicist Calvin Lowe was born in Roanoke Rapids, Michigan in 1955. After graduating from North Carolina Agricultural and Technical State University with his B.S. degree in physics, Lowe enrolled at the Massachusetts Institute of Technology (MIT) where he earned his M.S. degree in plasma physics in 1979. Upon completing his doctoral thesis, “Optical Properties of Graphite Intercalation Compounds,” Lowe graduated from MIT with his Ph.D. degree in solid state physics in 1983.

In addition to serving as faculty and administrator, Lowe served as a member of the board of Directors for the University System of Maryland from 2000 to 2006. He is a member of the American Physical Society, the National Society of Black Physicists and the Association of University Technology Managers. In 2011, Lowe received the Outstanding Achievement Award from the National Aeronautic and Space Administration’s Marshall Space Flight Center.

Lowe lives in Maryland with his wife, Tanya, and their two adult children, Maya and Calvin. His brother, Dr. Walter Lowe, is a professor of physics at Howard University.

Calvin Lowe was interviewed by The HistoryMakers on January 25, 2013.

See how Calvin Lowe is related to other HistoryMakers
Click Here To Explore The Archive Today!