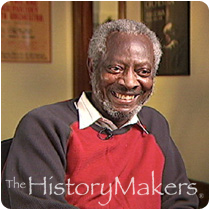 See how Calvin Hicks is related to other HistoryMakers

Calvin L. Hicks is director of community collaborations and program development and a member of the liberal arts faculty at the renowned New England Conservatory of Music (NEC) in Boston, Massachusetts. Born on August 18, 1933 in Boston, Hicks was profoundly influenced by his mother, Marguerite (Calvin) Hicks, a left-wing political activist and writer, and his maternal grandparents, Lenora and Thomas Calvin, who were strict Christians and devoted church activists. Absorbing his mother's interest in writing, he began his journalistic endeavors while still in high school, writing for the Boston Chronicle, a Black weekly newspaper.

After graduating from English High School in Boston in 1950, Hicks attended Drake University in Des Moines, Iowa, studying journalism and political science. After a brief stint with the Baltimore Afro-American newspaper, he moved on to New York City where he spent twelve years writing and teaching in the humanities and third world studies. During these years, he was engaged in national and international liberation struggles of the 1960s, and for a brief period during this time, he was employed at Time Magazine as a researcher. In New York City, he founded and chaired the On Guard Committee for Freedom, which included as members individuals such as Amiri Baraka, Archie Shepp, A.B. Spellman and Walter Bowe, and was executive director of the Monroe Defense Committee in support of Robert Williams and was influential in the Fair Play for Cuba Committee. With poet and writer Tom Dent, Hicks was one of the founders of Umbra Magazine and was also a member of the prestigious Harlem Writers Guild. As a freelance writer, Hicks' articles appeared in Freedomways, New Challenge and others. He was also a full-time reporter with New York Age newspaper. During his time in New York City, Hicks also worked as an instructor at Brooklyn College, City College of New York and Richmond College.

Returning to the Boston area in 1969, Hicks was offered a professorship in the sociology department at Brandeis University, the first African American to be offered this position, and then directed undergraduate and graduate programs in the Third World Studies Program at Goddard College in Vermont. He was a member of the faculty in the African American studies department and was the director of the Third World Center at Brown University. Hicks then moved on to serve as division chair of liberal arts and dean of academic affairs at Roxbury Community College in Boston. He was a co-founder of the Black Educators Roundtable in Boston, and from 1974 to 1975, Hicks was a graduate fellow at the Massachusetts Institute of Technology Graduate Department of Urban Planning and Urban Studies. In 1984, he received his master's degree in the philosophy of education from Cambridge College in Massachusetts.

Under Hicks' direction since 1992, Community Collaborations and Program Development at NEC has developed a dynamic music arts program, providing educational services and music instruction to a wide variety of individuals of all ages and cultures, as well as a host of traditional and non-traditional academic, civic and social institutions across the city of Boston. Among them are Music for Senior Citizens, the NEC Community Gospel Chorus, and the Roland Hayes/Marian Anderson Concert Series. Hicks has also been the driving force behind performances, symposia and events that have been for the benefit of Boston Public School teachers and students. In 1999, he began the Thomas A. Dorsey Summer Gospel Institute to take a more detailed look into the roots of gospel music. He also developed the Memory and Society: Theaters of Memory Remembering for the Present and the Future as well as the Institute for the Study of African American Secular and Sacred Music, both Summer Institutes. He was also a faculty member at the Longy School of Music in Cambridge, Massachusetts in the Department of Modern American Music.

See how Calvin Hicks is related to other HistoryMakers
Click Here To Explore The Archive Today!