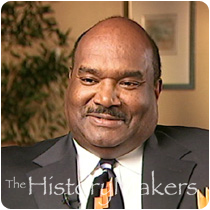 See how Calvin Darden is related to other HistoryMakers
Donate Now

Calvin Darden, senior vice-president of U.S. operations of the United Parcel Services, was born February 5, 1950, in Buffalo, New York. He was a scholarship recipient and graduate of Canisius College, where he began his career working part-time at the local UPS terminal. After graduating in 1972 with a B.S. degree in business management, he became a full-time employee with the company.

Darden's first responsibilities at UPS were to load and unload trailers at the Buffalo hub. In January of 1974, he was promoted to customer service supervisor. Soon after, he became the hub manager and later managed three packaging centers. After twelve management positions and six location moves, Darden had built a reputation for making distribution centers more efficient, improving service and boosting employee morale. In Nashville, Tennessee, he increased the center's efficiency from 65 percent to almost 100 percent. In 1993, he was promoted to vice-president and regional manager of a nine-state region based in California.

In 1995, Darden moved to the headquarters in Atlanta as the company's first quality coordinator. He developed and implemented the quality strategy, which focused on customer satisfaction, employee empowerment, process improvement and effective methods of measurement. He has been credited with the introduction of the company's trademark policies and innovations. Also, he has added the technology that allowed the company to begin delivering to central points. He has been working with UPS for over thirty years and ensures the pick-up and delivery of 13.5 million packages a day from eight million customers.

Darden has been committed to the community by starting a chapter of the Black Executive Exchange Program at UPS, which travels around the nation to colleges and universities talking to students. He serves on the board of directors for the National Urban League; Target Corporation; Coca-Cola Enterprises; and is on the board of trustees for the Atlanta Police Foundation. In July 2002, Darden was ranked eighth on Fortune Magazine's 50 Most Powerful Black Executives in America list. He is also active in his church, serving as chairman of the deacons at the Deliverance Temple Church of God and Christ in Atlanta, Georgia.

Darden and his wife, Patricia Gail, have been married for more than thirty years. They have three children.

See how Calvin Darden is related to other HistoryMakers
Donate Now
Click Here To Explore The Archive Today!