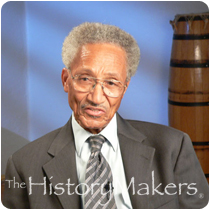 City council member Calvin Coolidge Goode served eleven consecutive terms (1972 to 1994), a total of twenty-two years, as a representative to the Phoenix, Arizona City Council. Born in rural Depew, Oklahoma in 1927, Goode’s family moved to Arizona when he was ten months old. His family settled in a homestead near Gila Bend, Arizona, where they worked in agricultural fields picking cotton. Goode graduated from Carver High School in 1945, the only school in Arizona built exclusively for African American students. He then obtained his B.A. and M.A. degrees from Arizona State University.

In 1949, Goode returned to Carver High School as an accountant, and later ran a tax accounting business, Calvin Goode & Associates. Goode worked for the Phoenix Union High School District from 1949 to 1979. He was elected as an at large representative to the Arizona City Council in 1972. This victory made Goode the second African American to ever serve on the Phoenix City Council. During his tenure, Goode ably advocated for jobs and job training in the community, improved programs for youth and developed a program to ensure that women and minority-owned small businesses would receive a proportionate share of city business. In 1984, Goode successfully advocated for a district form of city government.

As a Phoenix city councilman, Goode helped broker a compromise that led to a Phoenix ordinance that prohibited workplace discrimination against gays, lesbians and minorities. He was also instrumental in getting the Dr. Martin Luther King, Jr. holiday observed in the City of Phoenix, paving the way for the holiday to be observed statewide. Goode also championed a range of programs, from Head Start to downtown renewal projects. To commemorate his years of service to the city, a Phoenix municipal building was named in Goode’s honor.

Now retired, Goode continues to be involved in his community. He served on the Phoenix Elementary School Board for six years. Goode has been involved with Tanner Properties, which manages 393 apartments for seniors and disabled persons for twenty years. Goode remains active with the local Neighborhood Improvement Association, the Booker T. Washington Child Development Center, and the George Washington Carver Museum and Cultural Center as well as other non-profit and governmental programs.

Calvin Goode was interviewed by The HistoryMakers on July 12, 2007.

See how Calvin Coolidge Goode is related to other HistoryMakers
Donate Now
Click Here To Explore The Archive Today!