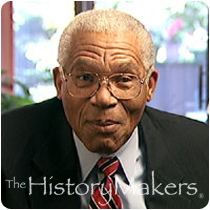 See how Calvin Burnett is related to other HistoryMakers

Longtime president of Coppin State College, Calvin W. Burnett was born in Brinkley, Arkansas, in 1932, but grew up in Davenport, Iowa. After graduating from high school, Burnett attended St. Louis University, where he received his bachelor's degrees in biology and political science. Burnett remained with St. Louis University after graduation to earn his PhD degree in social psychology.

Burnett began his career as a research social psychologist at St. Louis Hospital, and later served as the director of research at the Health and Welfare Council of Saint Louis. From there, he began his instructional and administrative path, teaching first at the Catholic University of America and later at Southern Illinois University. In 1970, Burnett was named president of Coppin State College, and he remained there until his retirement in 2002. Under his leadership, Coppin was transformed from primarily a teacher training college to a school offering more than twenty diverse programs, including a nursing school. Admissions increased from 1,100 to more than 4,000 and successfully kept the school independent when Morgan State University attempted to merge in 1991.

Burnett has also given his time to a number of community and civic organizations, serving on the board of the State of Maryland Civil Rights Commission, acting as past president of the Baltimore Area Boy Scouts of America, and chairing the state NAACP Jubilee Committee. He has appeared in several editions of Who's Who, been awarded the Outstanding Educator in America in 1971, and received the Fullwood Foundation Lifetime Achievement Award in 2001.

He is married to Gretta L. Burnett, who is also an educator. He has four grown children and four grandchildren. His personal interests include existential philosophy, classical and jazz music, and gardening.

See how Calvin Burnett is related to other HistoryMakers
Click Here To Explore The Archive Today!