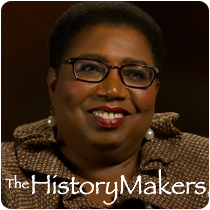 See how Callie Crossley is related to other HistoryMakers
Donate Now

Radio talk show host Callie Crossley was born in Memphis, Tennessee. After graduating from Memphis’ Central High school, she earned her B.A. in English in 1973 from Wellesley College. Crossley was also awarded two fellowships at Harvard University – a Nieman fellowship from the Nieman Foundation for Journalism and a fellowship from the Institute of Politics at the John F. Kennedy School of Government. She also served as a Woodrow Wilson Visiting Fellow at The Council of Independent Colleges.

Crossley began her career in media and journalism in 1974 as a local news reporter for WREC in Memphis. She then moved to WTHR-TV in Indianapolis, Indiana where she specialized in health reporting, and later was a general assignment reporter for WGBH’s The Ten O’clock News – Boston’s only live, daily, public news program. She returned to WGBH as a news reporter being awarded a Nieman Fellowship in 1982. In 1987, Crossley joined Blackside, Inc. where she worked on the six-hour documentary series “Eyes on the Prize: America’s Civil Rights Years: 1954-1965,” which aired on PBS. While there, she partnered with producer Jim DeVinney to produce, write, and direct two hours of the “Eyes on the Prize” series: “No Easy Walk: 1961-1963” and “Bridge to Freedom: 1965.” Crossley was then brought on as a producer for ABC Television Network’s “20/20” news magazine where her stories focused on health and medicine. In 1989, Crossley became a senior producer for the ABC News primetime special “Black in White America” (1989) and began appearing on WGBH-TV’s media criticism program, “Beat the Press.”

Returning to Blackside, Inc. in 2000, Crossley was made the senior producer for the PBS series, “This Far By Faith: African American Spiritual Journeys.” She joined WGBH Radio in 2010 and began hosting “The Callie Crossley Show,” a one-hour, live, call-in program. On July 9, 2012, she debuted as the host and moderator of the two-hour live “Boston Public Radio;” and, in early 2013, she began hosting “Under the Radar with Callie Crossley.” Crossley has served as host of WGBH-TV’s “Basic Black” and as a television and radio commentator on other local, as well as national programs. She also appeared as a contributor on “The Takeaway,” which aired on National Public Radio (NPR); Fox Television Station’s “Fox 25 Morning News”; “Reliable Sources” on CNN; and “News Hour,” which aired on PBS.

Crossley has received multiple journalism and film awards, most notably for her work on the acclaimed documentary series “Eyes on the Prize,” which earned her an Oscar nomination, a National Emmy, a Peabody Award, an Edward R. Murrow Award, and the Alfred I. DuPont-Columbia Award (Gold Baton). In 2012, the Ford Hall Forum honored her with its George W. Coleman Award; and, in 2013, she received the Wellesley Alumnae Achievement Award. Crossley has an Honorary Doctorate of Arts degree from Pine Manor College and an Honorary Doctorate of Humane Letters from Cambridge College.

Callie Crossley was interviewed by The HistoryMakers on April 23, 2013.

See how Callie Crossley is related to other HistoryMakers
Donate Now
Click Here To Explore The Archive Today!