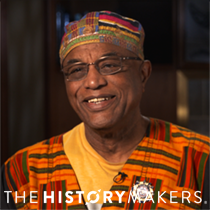 See how Cal Williams is related to other HistoryMakers

Community activist Cal Williams was born on November 30, 1941 in Monroe, Louisiana. A college graduate, Williams served in Vietnam in the United States Air Force during the early 1960s and participated in the historic March on Washington and was affiliated with the Congress of Racial Equality (CORE). In 1965, he moved from Louisiana to Alaska, seeking job opportunities, racial integration and a better life. In Alaska, Williams continued his political and civic activism working with the AdHoc Democrats organization in Alaska. He was named President of the Alaska Chapter of the National Association for the Advancement of Colored People (NAACP). He also served as a member of the Alaska Delegation at the 2008 Democratic National Convention in Denver, Colorado. In 2012, Williams ran for the Alaska House of Representatives District 17-serving the communities of Mountain View, Airport Heights, and Russian Jack in the Anchorage area, and was defeated by opponent Geran Tarr in the August 28th Democratic primary. Williams served as the Filipino choir director at St. Anthony’s Catholic Church, and also as the Chappie James American Legion Post 34 chaplain in Anchorage. He worked as a photographer and also helped to exhibit the collection of the late Alaskan historian George Harper, who documented the history of African Americans in Alaska, including the black U.S. Army troops who worked on the Alaska Highway. Williams was elected to the board of directors for Anchorage Senior Activity Center in 2016.

Williams was named in the Anchorage Municipal Assembly for his contributions to the growth and strength to the State of Alaska. In 2017, Williams was the recipient of the St. Francis of Assisi Award. Williams has served as Grand Knight of the Council of Knights of Columbus at St. Patrick's Church in Anchorage, as well as in 2018, he served as the District 22 chair for the Alaska Democratic Party.

Cal Williams was interviewed by The HistoryMakers on May 19, 2018.

See how Cal Williams is related to other HistoryMakers