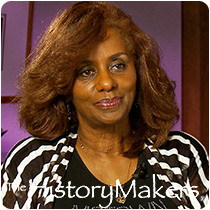 See how Cal Street is related to other HistoryMakers

Singer and performer Caldin “Carol” Street was born in Kalamazoo, Michigan to Dora and Reverend Willie Gill, Sr. Street was the middle child of seven children and was raised in Kalamazoo, where she graduated from Lincoln Jr. High School.

In 1961, Street was asked by her older sister, Mildred Arbor, to join a singing group called the Velvelettes with Bertha McNeal, Norma Fairhurst and Betty Kelley. Street became the lead singer of the quintet, which won an Alpha Phi Alpha talent contest at Western Michigan University in 1962. The Velvelettes auditioned for Berry Gordy and signed to Motown Records in 1962. They recorded two singles in 1963: "There He Goes" and "That's The Reason Why." In 1964, the Velvelettes recorded and released the single "Needle In A Haystack" on Motown’s VIP Records, which peaked at #19 on the National Billboard Magazine’s Top 40. The group then recorded "He Was Really Sayin' Somethin',” which peaked at #64 on the U.S. Billboard Hot 100 and at #21 on the Billboard R&B Singles chart.

In September of 1964, Betty Kelley left the Velvelettes to join Martha and the Vandellas. The remaining four Velvelettes continued to perform and released the singles “Lonely Lonely Girl Am I” and "A Bird in the Hand (Is Worth Two in the Bush)" in 1965, and "These Things Will Keep Me Loving You,” in 1966, which later became a hit in the United Kingdom peaking at #34 on the UK Singles Chart. The Velvelettes also performed on the Dick Clark Caravan of Stars tours, and the “chitlin circuit” that consisted of the Apollo Theatre in Harlem, New York; the Howard Theatre in Washington, D.C.; the Uptown Theatre in Philadelphia, Pennsylvania; the Royal Theatre in Baltimore, Maryland; the Regal Theatre in Chicago, Illinois; and the Fox Theatre in Detroit, Michigan. In the mid-1960s, Street moved from Kalamazoo to Detroit, Michigan, where she graduated from Chadsey High School and later from the business college of the Detroit Institute of Commerce.

In the late 1960s, Arbor, Fairhurst and McNeal left the Velvelettes and were replaced by Sandra Tilley and Annette Rogers-McMillan. Then, in 1969, Street disbanded the group after she married fellow singer and Temptations member, Richard Street. She later worked as an administrative assistant at Ford Motor Company and Western Michigan University, as an HR specialist at the Upjohn Company/Pfizer, and as an executive assistant for her local NAACP chapter.

Carol Street was interviewed by The HistoryMakers on June 26, 2014.

See how Cal Street is related to other HistoryMakers