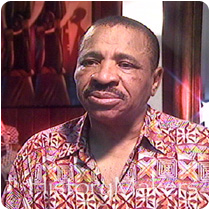 Africare co-founder and thiry-year president, C. Payne Lucas was born on September 14, 1933, in Spring Hope, North Carolina. He grew up in a family of fourteen children and earned money as boy picking cotton and shining shoes. In 1951, he earned his high school diploma from Spaulding High School, where he was a member of the baseball team and excelled in drama and public speaking activities. In 1950, during his junior year of high school, he joined the NAACP and became a youth representative for the state of North Carolina and initiated a voter registration drive in Spring Hope.

Lucas earned a bachelor's of science degree in history from the Maryland State College, now known as the University of Maryland, Eastern Shore, in 1959. During his sophomore year he left Maryland, and enlisted in the United States Air Force where he served for four years. He then went on to earn his master's degree in government from the American University in 1961.

After working as a volunteer for the Democratic National Committee in 1961, he joined the Peace Corps under the agency's first Director, Sargent Shriver. From 1962 to 1971, Lucas served as assistant country director in Togo, country director in Niger, director of the Africa Region and director of the returned volunteers. Lucas left the Peace Corps in 1971 to become the president of Africare, an organization he co-founded with William Kirker. Today, Africare is the oldest and largest African-American nonprofit organization specializing in aid to Africa. Africare has more than 150 programs, which benefit families and communities in nearly thirty nations throughout the continent.

After thirty-one years as president, Lucas retired from Africare in 2002 and was succeeded my Julius Coles. He continues to remain active with the organization and serves on its board of directors. Currently he serves as chief executive officer of Lodestar, LLC, a domestic and international business consulting firm.

He is married to Freddie Hill Lucas and they have three grown children and one grandchild.