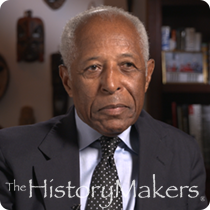 See how C. Bernard Fulp is related to other HistoryMakers

Bank executive C. Bernard Fulp was born on October 9, 1935 in Winston-Salem, North Carolina to Amanda Murray Fulp and Cyrus Fulp. Fulp graduated from Atkins High School in Winston-Salem in 1953, and received his B.S. degree in elementary education from Winston-Salem State University in 1957. Fulp then served in the U.S. Air Force until 1962, and went on to earn his M.A. degree in education from the University of Connecticut in Storrs, Connecticut in 1963. He also completed a program in management development at the Harvard University Graduate School of Business Administration in 1978.

Fulp began his career in banking as a loan manager at the Wachovia Bank and Trust Company branch in Winston-Salem in 1964. He also worked at State Street Bank and Trust Company and Unity Bank and Trust Company before joining the New England Merchants National Bank in 1970, where he eventually worked his way up to the position of senior vice president. In this role, he was responsible for the bank’s emerging middle market group. When New England Merchants National Bank merged with The CBT Corporation in 1983, creating the Bank of New England – then the second largest bank in New England – Fulp was promoted to executive vice president in charge of the bank’s private banking division, making him the first African American to assume the role. Fulp left the Bank of New England after it was acquired by FleetBoston Financial in 1991. He then worked for the accounting and advisory firm of Grant Thornton LLP until 1994 when he co-founded Middlesex Bank and Trust in Newton, Massachusetts. Fulp led Middlesex Bank until 2002, when it was acquired by Connecticut’s Westport National Bank. In 2004, Fulp became the president of GoBiz Solutions, Inc.

Fulp is married to Carol Fulp, and has three children: Deanna, Rachael, and Cyrus.

C. Bernard Fulp was interviewed by The HistoryMakers on October 21, 2016.

See how C. Bernard Fulp is related to other HistoryMakers
Click Here To Explore The Archive Today!