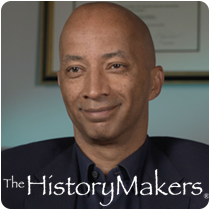 See how Byron Pitts is related to other HistoryMakers
Donate Now

Broadcast journalist Byron A. Pitts was born on October 21, 1960 in Baltimore, Maryland to William and Clarice Pitts. He grew up in a working-class neighborhood and was raised by a single mother. Pitts graduated from Archbishop Curley High School in Baltimore in 1978 and went on to attend Ohio Wesleyan University, where he received his B.A. degree in journalism and speech communication in 1982.

Pitts first interned at WTVD in Durham, North Carolina. From 1983 to 1984, he reported and served as the weekend sports anchor at WNCT-TV in Greenville, North Carolina. He worked as a military reporter for WAVY-TV in Portsmouth, Virginia from 1984 to 1986, and as a reporter for WESH-TV in Orlando, Florida from 1986 to 1988. Pitts then moved to Tampa in 1988, where he became a reporter and substitute anchor for WFLA-TV until 1989. He then joined WCVB-TV in Boston, Massachusetts as a special assignment reporter. His final local job was as a general assignment reporter for WSB-TV in Atlanta, Georgia from 1994 to 1996. In 1997, Pitts moved to Washington, D.C., where he was hired as a correspondent for CBS Newspath, the 24-hour affiliate news service of CBS News. He was made a CBS News correspondent in May 1998, and was based in the Miami, Florida and Atlanta, Georgia bureaus before moving to New York City in January of 2001. Pitts later became a chief national correspondent for CBS Evening News and a contributor to the newsmagazine 60 Minutes. As a CBS News reporter, Pitts covered the September 11th attacks, the Iraq War, Hurricane Katrina, the war in Afghanistan, the military buildup in Kuwait, the Florida fires, the Elian Gonzalez story, the Florida Presidential recount, the mudslides in Central America, and the refugee crisis in Kosovo. In 2013, Pitts left CBS News and was named chief national correspondent and anchor for ABC News, where he covers national news stories and in-depth features for the network, reporting for all broadcasts and platforms including Good Morning America, World News with Diane Sawyer, Nightline, This Week and 20/20.

Pitts received national Emmy Awards for his coverage of the September 11th terrorist attacks and the Chicago train wreck of 1999. His other honors include the 2001 Journalist of the Year Award from the National Association of Black Journalists, as well as four Associated Press Awards and six regional Emmy Awards. His book, Step Out on Nothing: How Faith and Family Helped Me Conquer Life's Challenges, was published in 2009.

See how Byron Pitts is related to other HistoryMakers
Donate Now