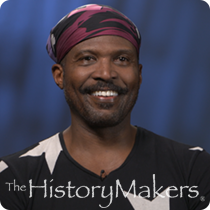 "Even A Broken Clock Is Right Twice A Day."

Fashion designer Byron Lars was born on January 19, 1965 in Oakland, California to Gloria Gardner Bonds and Earnest Lars. Lars grew up in nearby El Cerrito, California, where his mother encouraged his creativity, and his father, who worked in construction, nurtured his interest in craftsmanship. Lars attended El Cerrito High School, taking advanced math classes in preparation for a career in architecture. In the tenth grade, a friend taught Lars to use a sewing machine; and Lars taught himself to make patterns. He designed his classmates’ prom dresses in order to fund a school trip to Europe, and created a gown for his own senior prom date. Upon graduation from high school, Lars completed a two-year fashion program at Brooks Fashion Institute of Technology in Long Beach, California, where he earned first place at the student design fashion show. In 1986, Lars enrolled at the Fashion Institute of Technology in New York City, although he left before graduating.

Between 1987 and 1991, Lars used his patternmaking skills to obtain freelance work for Kevan Hall, Gary Gatyas, and Nancy Crystal Blouse Co., among others. He developed his first sample set of seven garments, which he marketed to high end retail buyers. In 1990, Lars received an order for forty pieces of his designs from Henri Bendel on Fifth Avenue in New York City. The following year, Lars received orders from Bloomingdale’s, Neiman Marcus, and other high end retailers. His collection won widespread acclaim, and Lars was named Women’s Wear Daily’s Rookie of the Year. Faced with a rapidly growing business, Lars signed a licensing contract for his Shirt Tales line in 1995. Lars then entered into a contract with Mattel to design collectible Barbie dolls, and began designing Green T, an affordable clothing line he founded in 1999.

Lars was well-known for his menswear designs, especially men’s dress shirting and pattern mixing, as well as his sensitivity to fit and cut, and his use of draping and sarong-inspired tying. His line, Byron Lars Beauty Mark, which launched in 2001, expanded to include plus sizing. Lar’s Byron Lars Beauty Mark pieces were worn by celebrities such as Angela Bassett and First Lady Michelle Obama.

Byron Lars was interviewed by The HistoryMakers on October 6, 2016.