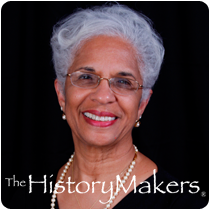 See how Bunnie Jackson-Ransom is related to other HistoryMakers

Jackson-Ransom was hired as an instructor of business and supervisor of secretarial services at Bennett College in Greensboro, North Carolina. She then joined Economic Opportunity Atlanta, Inc., where she was a contract specialist, program coordinator, director of planning and program development during her five-year tenure. In 1965, she met and married Maynard Jackson, who went on to become the first black mayor of Atlanta in 1973; Jackson-Ransom and Jackson divorced in 1976.

In 1975, Jackson-Ransom founded firstClass, Inc., a company specializing in marketing, community affairs, communications and public relations. With firstClass, Inc., she has worked with many clients including The National Conference of Black Mayors, Waste Management, Inc. and the Burger King Corporation. Jackson-Ransom is responsible for designing and implementing many on-going community action projects for her clients, working to include the goals of the urban community that benefit and enhance the lives of the least fortunate. In 1978, Jackson-Ransom worked with Bernadette Carey, publicity director of Fashion Fair Cosmetics, on a line of black cosmetics. She would later marry Raymond Ransom, a bass player for the musical group, Brick. From 1979 to 1983, Jackson-Ransom was owner and operator of Airport Amusement Concessions at Hartsfield International Airport in Atlanta. She also managed the careers of several performing artists between 1978 and 1988 when she served as Chief Administrative Officer of a conglomerate company under the umbrella of Atlanta Artists. For Atlanta Artists Management, Jackson-Ransom served as president. She managed multi-million dollar record sales, toured the world with performances and promotions, negotiated production deals for her artists (which included CAMEO and Larry Blackmon, The SOS Band and Cashflow) and carried her artists to gold and platinum record status. She also served as an instructor at Georgia State University teaching a course called “Artist Representation” from 1981 to 1990 and in 1995.

Jackson-Ransom is a member of the Atlanta League of Women Voters (organizer of the Cascade Heights Branch), Delta Sigma Theta Sorority, Inc., Executive Committee member of the Atlanta branch of the NAACP, the Azalea Chapter of The Links, Inc., the Metropolitan Atlanta Coalition of 100 Black Women and the National Council of Negro Women. Her awards include Outstanding Young Women in America (1970-1980). Jackson-Ransom has been listed in Who’s Who in American Women, Who’s Who in Georgia and Who’s Who in Black America from 1981 to the present. She was listed in Dollars and Sense Magazine as one of “America’s Top 100 Black Business and Professional Women” in 1985. She was also listed among Atlanta’s “Top 100 Women of Influence” by the Atlanta Business League from 1997 to 2005 and received a community service award from the Southern Christian Leadership Conference in January of 2008.

Jackson-Ransom was interviewed by The HistoryMakers on March 27, 2007.

See how Bunnie Jackson-Ransom is related to other HistoryMakers
Click Here To Explore The Archive Today!