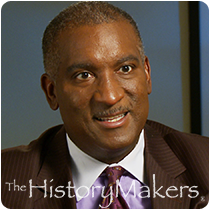 See how Bryan Monroe is related to other HistoryMakers
Donate Now

Monroe interned as a photojournalist at United Press International, The Roanoke Times, and The Seattle Times before becoming director of photography and graphics editor at Myrtle Sun Beach News. In 1989, Monroe directed Knight Ridder’s 25/43 Project, which aimed to revamp newspapers in order to appeal to a younger audience. In 1991, he served as deputy managing editor of Knight Ridder’s flagship paper, The San Jose Mercury News, until he became a Nieman Fellow at Harvard University in 2002. During his fellowship, Monroe examined leadership and creativity in the newsroom, and after the fellowship, he became assistant vice president of news at Knight Ridder. In 2006, Monroe led the team of journalists from Knight Ridder and the Biloxi Sun Herald who won the Pulitzer Prize Gold Medal for Public Service for coverage of Hurricane Katrina. Then, after Knight Ridder was sold to the McClatchy Company, Monroe went to work for the Johnson Publishing Company, where he served as vice president and editorial director of Ebony and Jet from 2006 to 2009, conducted the first interview with then President-elect Barack Obama following his November victory, and had the last interview with pop star Michael Jackson before he died. In 2011, Monroe became the editor of CNNPolitics.com and in 2014 was named the Washington Editor/Opinion for CNN.

Monroe served as the sixteenth president of the National Association of Black Journalists (NABJ) from 2005 to 2007. He has won numerous regional, national, and international journalism awards and lectured globally from Cape Town, South Africa to Sydney, Australia to Dubai, UAE. He was recognized by Presstime magazine as one of the “20 Under 40” — the 20 top American journalists under 40 years old; MediaWeek magazine as one of the nation's “Media Elite”; and San Francisco’s CityFlight as one of the “10 Most Influential African Americans in the Bay Area.”

Monroe lives in Chevy Chase, Maryland with his two children, Seanna and Jackson.

Bryan Monroe was interviewed by The HistoryMakers on May 18, 2014.

See how Bryan Monroe is related to other HistoryMakers
Donate Now