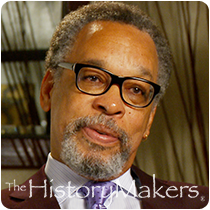 See how Bruce Gordon is related to other HistoryMakers
Donate Now

Corporate executive and civic leader Bruce Gordon was born on February 15, 1942 in Camden, New Jersey. His parents, Walter and Violet Gordon, were both educators. Gordon attended Gettysburg College in Gettysburg and graduated with his B.A. degree in 1968. He later enrolled in the Sloan Fellows Program at the Massachusetts Institute of Technology Sloan School of Management and graduated from there with his M.S. degree in management in 1988. He was awarded an honorary Doctorate degree from Gettysburg College in 2006.

In 1968, Gordon was hired by Bell of Pennsylvania. He also wrote a weekly column for a suburban Philadelphia paper, Today’s Post. Gordon became a sales manager in Bell Atlantic’s marketing department in 1972. By 1976, he was a management supervisor in marketing, and earned a promotion to divisional operations manager in 1981. From 1983 to 1985, Gordon’s role involved oversight of the company’s phone center stores. Following that position, he was promoted to general manager of marketing and sales, and then became vice president of marketing in 1988. After Bell Atlantic merged with GTE Communications in 2000, Gordon was promoted to president of the Retail Markets Group of the company then known as Verizon Communications. He retired after thirty-five years of service in 2003. Gordon was elected president of the NAACP in 2005, and served in that capacity until 2007. He has also served on a variety of boards, including CBS Corporation, Northrop Grumman Corp., and Tyco International Ltd. In September 2012, he became the chairman of the board of ADT Corporation.

In 1998, Black Enterprise magazine named Gordon as its “Executive of the Year;” and, in 2002, Gordon was ranked number six on Fortune Magazine’s list of the “50 Most Powerful Black Executives.” He was recognized as one of “100 Most Influential Black Americans and Organization Leaders” in Ebony Magazine in 2006. Gordon is married to his second wife, Tawana Tibbs, a former Verizon employee who serves as president of the Board of Trustees of Big Brothers Big Sisters of New York City. He has one son, Taurin, from his first marriage.

Bruce Scott Gordon was interviewed by The HistoryMakers on July 14, 2013.

See how Bruce Gordon is related to other HistoryMakers
Donate Now