Information about A. Bruce Crawley 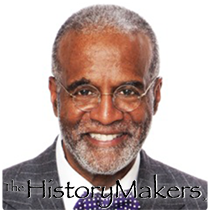 See how A. Bruce Crawley is related to other HistoryMakers

A. Bruce Crawley, one of six children, was born on March 24, 1946, in Philadelphia to Edith Marie Jenkins and Joseph McHerrin.

Mostly educated in Catholic schools, Crawley graduated from St. Joseph’s Preparatory School in 1963 and St. Joseph’s University in 1967. He studied marketing and management and has succeeded admirably in those fields. His first job after earning his bachelor’s degree was at First Pennsylvania Bank. Crawley was promoted to posts as director of branch marketing, vice president and advertising director before becoming senior vice president and director of public and investor relations. Crawley won the Bank Marketing Association’s Penny Award for outstanding public relations programs and annual reports. He also testified before the U.S. Senate Small Business Subcommittee and the U.S. Senate Banking Committee.

Crawley earned a master’s degree in journalism from Temple University in 1983. He left First Pennsylvania Bank in 1989 to found the public relations firm Crawley, Haskins & Rodgers, where he serves as president and CEO. Crawley also founded the African American Chamber of Commerce of Philadelphia.

Crawley has served as chairman of the Philadelphia Urban League and the Public Relations Society of America’s National Multicultural Affairs Committee, and as public relations chairman for the Pennsylvania State Caucus of Black Legislators. Other civic commitments include membership on the board of Independence Blue Cross, the National Urban League and Claridge Casino Hotel. Crawley has been politically active as well, serving as campaign manager and consultant for numerous elected officials.

Crawley has one adult child, Christopher Bruce Crawley, and has been married to Pamela Browner-Crawley since 2000.

Crawley was interviewed by The HistoryMakers on September 9, 2002.

See how A. Bruce Crawley is related to other HistoryMakers
Click Here To Explore The Archive Today!