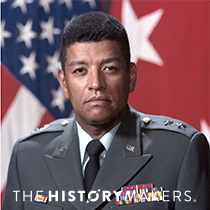 See how Brig. Gen. Leo A. Brooks is related to other HistoryMakers

Retired U.S. Army Brigadier General Leo Brooks was born on August 9, 1932 in Alexandria, Virginia. Brooks was raised in Alexandria where his family has a long military tradition, dating back to Brooks’ great-grandfather. Brooks attended Virginia State University where he was also a member of the Reserve Officers Training Corps. Brooks graduated from Virginia State University in 1954 and was a distinguished military graduate from ROTC. General Brooks was commissioned a second lieutenant in the Quartermaster Corps.

During his first overseas assignment, he received a Regular Army commission and was detailed to the Infantry, where he served as a platoon leader with the 2nd Infantry Division in Alaska. Following his Infantry detail, he rejoined the Quartermaster Branch and commanded two companies. His initial Pentagon assignment was as a budget liaison to the U.S. Congress for the Office of the Deputy Chief of Staff for Logistics, HQDA. He served two tours in Vietnam, first as an advisor to the Vietnamese Army and later as a Battalion Commander. Other key staff assignments included: Deputy Secretary of the General Staff for the Army Materiel Command and member of J4, Office of the Joint Chiefs of Staff. Considered one of the Army’s premier logisticians, his key senior-level assignments included four commands over a ten year period: Commander, Sacramento Army Depot; Commander, 13th Corps Support Command, Fort Hood, Texas; Commanding General, US Army Troop Support Agency, where he directed 178 commissary stores; and Commanding General of the Defense Personnel Support Center, Philadelphia, Pennsylvania where he directed the procurement and management of all food, clothing, textile, and medical supplies and equipment for all the military services. He retired while serving as a Major General in 1984 to accept an appointment as the Managing Director of the City of Philadelphia. Since he retired before serving three full years in grade, he was retired as a Brigadier General. His awards include the Distinguished Service Medal, the Defense Superior Service Medal, Legion of Merit, Bronze Star Medal, Meritorious Service Medal, Joint Service Commendation Medal, and Army Commendation Medal.

General Brooks holds a Bachelor of Science degree from Virginia State University, a Master of Science in Financial Management from George Washington University and the Honorary Doctor of Laws Degree from New England School of Law. He is also a graduate of the U.S. Army Command and General Staff College, Fort Leavenworth, Kansas, and the National War College in Washington, D.C. General Brooks’ family is the only African American family in the history of the United States to have a father and two sons to attain the rank of general in the army-BG Leo A. Brooks, Jr. (USA-Ret.) and General Vincent K. Brooks, Commander, US Army Pacific. He, and his wife, Naomi Lewis Brooks also have a daughter, Attorney Marquita K. Brooks. In retirement, he has served on many boards and councils. He currently is an elected member of the American Bar Association Council on Legal Education and Accreditation of law schools.

U.S. Army Brigadier General (Ret.) Leo A. Brooks was interviewed by The HistoryMakers on July 22, 2013.

See how Brig. Gen. Leo A. Brooks is related to other HistoryMakers
Click Here To Explore The Archive Today!