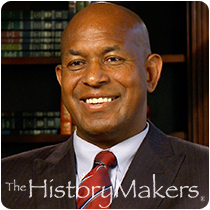 See how Brig. Gen. Arnold Gordon-Bray is related to other HistoryMakers

U.S. Army Brigadier General Arnold N. Gordon-Bray was born in Columbia, South Carolina. His parents were Felix Gordon and Martha McNeil, and his stepfather was Isiah Bray. He graduated from Waynesville High School in Waynesville, Missouri in 1973. Gordon-Bray became interested in pursuing a military career when his brother, Michael, began to collect information about the United States Army. Gordon-Bray enrolled at Central Missouri State University (now the University of Central Missouri) in the fall of 1973 as an art major where he joined the Reserve Officer Training Corps program. He graduated from Central Missouri State University with his B.S. degree in art in 1978. Gordon-Bray’s military education includes the U.S. Army Command and General Staff College, the Combined Arms Services and Staff College the, the Naval War College, and numerous other military schools.

Gordon-Bray became chief of the training division at Joint Special Operations command at Fort Bragg, North Carolina in 1990. In 1996, he was named commander of the 1st Battalion of the 508th Airborne Combat Team in Vicenza, Italy. In 1999, he graduated from the Air War College in Montgomery, Alabama with his M.A. degree in military strategic studies; and, in 2001, Gordon-Bray graduated with his M.A. degree in operations management and supervision from the Naval War College in Newport, Rhode Island. He then assumed command of the 2nd Brigade of the 82nd Airborne Division, known as the “Falcon Brigade.” He led the Falcon Brigade during the early months of the Iraq War in 2003, and then served a second tour of duty in Iraq from 2006 to 2007 as the principal advisor to the Iraqi Ground Force Commander. During 2007, Gordon-Bray became deputy commanding general of the United States Army Cadet Command in Fort Monroe, Virginia. In 2011, Gordon-Bray became deputy director of operations for the United States Africa Command (AFRICOM). He then retired in November of 2012 and then started his own consulting firm, ANGB Consulting, in Fayetteville, North Carolina in January of 2013.

Gordon-Bray military honors include the Legion of Merit (with Oak Leaf Cluster), the Bronze Star, and the Meritorious Service Medal.

Brigadier General Arnold N. Gordon-Bray was interviewed by The HistoryMakers on August 11, 2013.

See how Brig. Gen. Arnold Gordon-Bray is related to other HistoryMakers
Click Here To Explore The Archive Today!