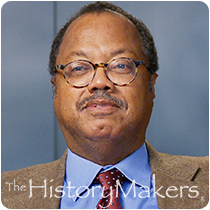 See how Brent Staples is related to other HistoryMakers

Journalist and author Brent Staples was born on September 13, 1951, in Chester, Pennsylvania. His father, Melvin Staples, was a truck driver; his mother, Geneva, a homemaker. The oldest son of nine children, Staples grew up in Chester, but, due to his family’s financial problems, moved seven times before finishing junior high school. After being approached by the only African American professor at Widener University, then the Pennsylvania Military College, Staples was accepted into Widener through a program called Project Prepare. He graduated from there in 1973 with his B.A. degree in behavioral science. Staples was awarded two doctoral fellowships; one from the Danforth Foundation and another from the Ford Foundation. He went on to receive his Ph.D. degree in psychology from the University of Chicago in 1982.

In 1994, Staples’ autobiography Parallel Time: Growing Up in Black and White, was published. Parallel Time was awarded the Anisfield-Wolf Book Award in 1995, and was also a finalist for the Los Angeles Times Book Prize. In 2000, he was awarded an Honorary Doctorate in Humane Letters from Mount St. Mary College. In 2006, Staples was awarded a Fletcher Foundation Fellowship for his book-in-progress, Neither White Nor Black: The Secret History of Mixed-Race America. He has also served as a visiting fellow for multiple organizations including the Hoover Institution, the University of Chicago and Yale University.

Brent Staples was interviewed by The HistoryMakers on October 18, 2013.

See how Brent Staples is related to other HistoryMakers