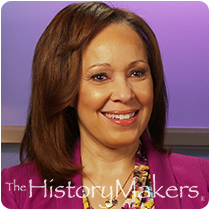 See how Brenda Wood is related to other HistoryMakers
Donate Now

Broadcast journalist Brenda Blackmon Wood was born on September 8, 1955 in Washington, D.C. to Welvin Bray and Bernice Blackmon. Wood graduated from Takoma Academy in Takoma Park, Maryland in 1973. She went on to receive her B.A. degree in speech communication and mass media from Loma Linda University in Southern California in 1977.

Upon graduation in 1977, Wood was hired as a news reporter for WAAY-TV in Huntsville, Alabama. In 1978, she left that market for a brief time to serve as a general assignment reporter at WSM-TV in Nashville, Tennessee. One year later, Wood returned to WAAY-TV as the evening news anchor. In 1980, she moved to Memphis, Tennessee, where she spent eight years as the evening weekday news anchor for WMC-TV. In 1988, Wood was hired as the evening news anchor and reporter at Atlanta, Georgia’s WAGA-TV, where she also hosted the Emmy award-winning news magazine show, Minute by Minute. She then joined WXIA-TV in Atlanta in 1997, where she anchors the 6pm and 11pm weekday newscasts, as well as her signature newscast, The Daily 11 at 7 with Brenda Wood. Wood was also co-producer and host of WXIA-TV’s Emmy award-winning prime time show, Journeys with Brenda Wood, which has received the National Association of Black Journalists’ 1998 award for Community Affairs Programming.

Wood is a member of the NATAS, the NABJ, the AABJ, the Atlanta Press Club, and Women in Film. She serves on the boards of Kenny Leon's True Colors Theater Company and Chayil, Inc., a nonprofit that helps domestic abuse victims. In addition, Wood serves on several local advisory boards in the Atlanta area.

Wood lives in Atlanta, Georgia and has two daughters, Kristen and Kandis.

Brenda Wood was interviewed by The HistoryMakers on February 21, 2014.

See how Brenda Wood is related to other HistoryMakers
Donate Now
Click Here To Explore The Archive Today!