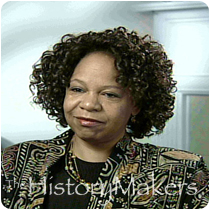 See how Brenda Singletary is related to other HistoryMakers
Donate Now

Artist Brenda Singletary was born on May 23, 1954 in Detroit, Michigan. She received her B.A. degree in art education from Morris Brown College. Prior to becoming a fulltime visual artist, she worked several years in television broadcasting until 1985.

Singletary’s original pieces are done in oil, enamel, acrylic, gold leaf, and pastels; they range from figurative and abstract to floral and landscapes. Singletary’s experience in broadcasting, along with her artistic dedication, created a unique artistic career that is centered on projects to help support community non-profits. She has raised funds for organizations such as The March of Dimes, 100 Black Women and 100 Black Men, United Negro College Fund, the Atlanta Day Shelter, the Senior Connection, and the National Black MBA Association.

In 2001, Singletary was invited by the White House as the guest lecturer for a luncheon hosted by the President’s Commission on White House Fellows to speak on current events and express her views as an African American artist.

As an advocate of community arts, Singletary has worked with Atlanta-area high schools and facilitated seminars for students who wish to express themselves creatively.

Singletary was interviewed by The HistoryMakers on January 16, 2007.

See how Brenda Singletary is related to other HistoryMakers
Donate Now
Click Here To Explore The Archive Today!