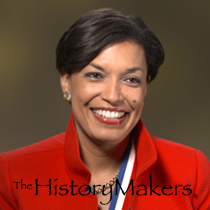 "People Fall Down, Gold Medal Winners Get Up First."

Civic leader and skier Bonnie St. John was born on November 7, 1964 in Detroit, Michigan to Ruby Cremaschi-Schwimmer, an educator, and Lee St. John, an engineer. St. John's leg was amputated at the age of five; and in 1979, St. John began skiing with an amputee club. She graduated from Mission Bay High School in San Diego in 1982, and competed in the 1984 Winter Paralympics, where she won two bronze medals and a silver medal, becoming the second fastest woman in the world on one leg in that year, and the first African American to medal in the Winter Paralympics. St. John earned her A.B. degree in government magna cum laude from Harvard University in 1986, and received a Rhodes scholarship to attend the University of Oxford, where she earned her M.Litt. degree in economics in 1990.

Upon graduation, St. John began her career in sales at IBM. In 1992, she was appointed by President Bill Clinton as a director for human capital issues for the White House National Economic Council. St. John left her position at the White House in 1994, and pursued a career as a writer and motivational speaker. She also founded Blue Circle Leadership, a business consultation agency with clients that include Target, FedEx, Microsoft, Pepsi, and Disney, among others. St. John was asked to speak during the opening ceremonies of the 2002 Paralympics in Salt Lake City, Utah; and in 2010, she represented the United States as a member of President Barack Obama’s official delegation to the Paralympic Winter Games in Vancouver, Canada.

St. John was selected by NBC Nightly News as one of the five most inspiring women in America in 1996. She also made appearances on The Today Show, Good Morning America, CNN, Montel, and the Discovery Health Channel. St. John received an honorary doctorate of humane letters from Lasell College in 2004, and President George W. Bush honored St. John for Black History Month at the White House in 2008. She wrote six books, including two Amazon #1 bestsellers – Live Your Joy, published in 2009, and How Great Women Lead, which was published in 2012 and co-authored with her daughter, Darcy Deane. How Great Women Lead featured a compilation of interviews with influential women leaders such as Condoleeza Rice and Hillary Rodham Clinton.

St. John is married to Allen P. Haines, and has one daughter named Darcy Deane.

Bonnie St. John was interviewed by The History Makers on August 11, 2016.