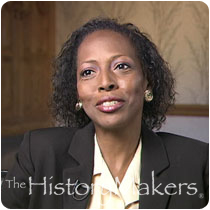 See how Bonita Gooch is related to other HistoryMakers

Bonita Gooch, publisher of The Community Voice of Wichita, Kansas was born on August 15, 1955, in Wichita. Her parents Dora, a schoolteacher, and U. L. "Rip" Gooch, an employee in the aviation business, migrated to Wichita from Tennessee seeking opportunities afforded by the aircraft industry. Gooch has exciting memories of flying with her father. As a teenager, she took a journalism class and volunteered for the North High School newspaper. Gooch also served as layout stripper for The Wichita Times, the local black paper.

She graduated from North High School in 1973 and earned a B.A. in Journalism from the Kansas State University and after a brief attempt at a career in journalism, Gooch went back to school for a Masters degree in Public Administration. After school, Gooch moved to Florida. In her absence her father, "Rip" Gooch ran for and won a seat in the Wichita City Council. He would become a Kansas State Senator in 1992.

Bonita Gooch returned to Wichita after the death of her brother and was persuaded by her father to purchase The Community Voice, Wichita's black weekly newspaper in 1995. In a few short years, Gooch has made The Community Voice an active participant in its community, which she believes is vital to its success. The paper includes local and national news that focuses on black political and social issues with commentary from Wichita's own Dr, Ronald Walters, Aaron McGruder's nationally syndicated, thought-provoking comic strip, The Boondocks, and insightful articles about black life.

Gooch is also co-host of weekly Community Voice Radio Show on Wichita's KDGS Radio. Gooch has pioneered cause-related marketing programs that allow organizations to raise funds through subscription sales. Gooch, who serves on the boards of the American Red Cross and the Kansas African American Affairs Commission, among many others, lives in Wichita with her daughter.

See how Bonita Gooch is related to other HistoryMakers
Click Here To Explore The Archive Today!