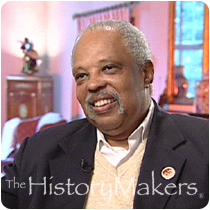 See how Bobby William Austin is related to other HistoryMakers

Foundation executive Bobby William Austin was born in Jonesville, Kentucky on December 29, 1944. His father, Herschel, worked as a porter on the L&N Railroad, and his mother, Mary, was a homemaker. His mother also instilled in him a passion that would remain with Austin throughout his life: literature. As a child, he would receive books for Christmas instead of toys, and he would carry them everywhere with him. After graduating from the High Street High School in Bowling Green, Kentucky, Austin went on to attend Western Kentucky University, also in Bowling Green, earning his B.A. degree in economics and sociology in 1966. From there, he attended Fisk University, earning his master’s degree in sociology in 1968 and then went on to earn his Ph.D. from McMaster University in Hamilton, Ontario, Canada in 1972.

After completing his doctoral studies, Austin relocated to Washington, D.C., where he became involved with a number of organizations. He was the founder and editor of the Urban League Review, and he also served as a partner with Austin Ford Associates, a Washington, D.C. based consulting firm. Following these positions, Austin became an executive assistant to the president of the University of the District of Columbia (UDC), and later served as an assistant to the UDC Board of Trustees and the late Secretary of Commerce Ron Brown. He has also worked as a speechwriter for former Housing and Urban Development Secretary Patricia Roberts Harris and the former mayor of Washington, D.C. Sharon Pratt Kelly. From 1986 until 1998, Austin was the program director for the W.K. Kellogg Foundation.

In 1997, Austin founded the Village Foundation, an organization dedicated to “repairing the breach” between African American males and the rest of society. Its mission is to engage African American young men and boys in American society, by reconnecting them first to their local communities and then to the larger society. One of the leading initiatives of the Village Foundation today is the Give a Boy a Book Day campaign. This program is designed to encourage reading and literacy in young African American men. He continues to serve there as the president and CEO.

Austin is active in a number of areas in addition to his work with the Village Foundation. He serves as the Mohatma M.K. Gandhi Fellow of the American Academy of Political and Social Science, and he serves on the boards of the National Housing Trust and the National Institute for Urban Wildlife. He is also the co-author of Repairing the Breach with Andrew Young. Austin is also listed in Who’s Who in Black America, Outstanding Young Men of America and Men of Achievement among others.

See how Bobby William Austin is related to other HistoryMakers
Click Here To Explore The Archive Today!