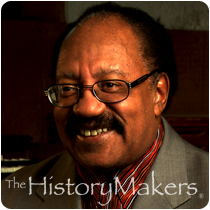 See how Bobby Rogers is related to other HistoryMakers

Bobby Rogers, a second tenor with The Miracles, was born on February 19, 1940 in Detroit, Michigan. Coincidentally, he was born on the same day and in the same hospital as Miracles lead singer Smokey Robinson. At the age of fifteen, Rogers joined Robinson’s group, The Matadors, with his cousin, Claudette Rogers. In 1959, he, along with Robinson, Rogers, Ronald White and Pete Moore, joined Berry Gordy’s new Motown label, with the new name, The Miracles.

Aside from being a key background vocalist, Rogers helped write several songs for both The Miracles and other Motown acts. These include “The Way You Do The Thing You Do,” by The Temptations, and The Miracles own hit, “Going to A Go-Go.” After Smokey Robinson’s departure in 1972, Rogers stayed with the group, helping to recruit new lead singer Billy Griffin. With Griffin, the Miracles recorded three additional hits, notably 1975’s “Love Machine.” It is Rogers who offers the song’s signature deep growls. After Griffin and Moore departed, Rogers kept The Miracles brand alive, by adding various new members to the lineup.

In 1983, Rogers joined Robinson and other band mates for the Motown’s 25th anniversary special. He, Robinson, and the rest of the Miracles were inducted into the Vocal Group Hall of Fame in 2001. The Miracles received a star on Hollywood’s Walk of Fame in 2009. Rogers passed away on March 3, 2013.

See how Bobby Rogers is related to other HistoryMakers
Click Here To Explore The Archive Today!