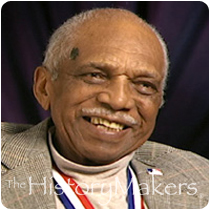 Legendary third baseman Bobby Robinson was born on October 25, 1903. He grew up in Whistler, a town outside of Mobile, Alabama, with fellow Negro League baseball player, Satchel Paige and Ted "Double Duty" Radcliffe.

Robinson was scouted for the Negro League while playing baseball with the semi-professional Pensacola Giants. The Giants made a trip to Birmingham, Alabama, when a scout who had been watching him for several weeks approached Robinson. The scout offered Robinson a contract to play professionally with the Indianapolis ABC's. Robinson accepted the offer, but instead of joining the team mid-season, waited until the next season's spring training to start.

Robinson made his Negro League debut in 1925. Over the course of his eighteen-year career, Robinson played with eleven Negro League teams including the Birmingham Black Barons, the Chicago American Giants, and the Memphis Red Sox. During those years Robinson also played against many of the best Major League players. Robinson is particularly well known for his stellar defensive play, earning him the nickname "The Human Vacuum Cleaner". He is considered by many to be one of the greatest third basemen to ever play the game. Robinson retired from baseball in 1942.