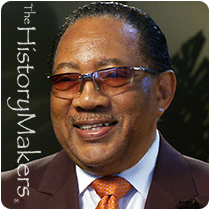 See how Bobby Jones is related to other HistoryMakers

Gospel vocalist and television host Bobby Jones was born on September 18, 1938 in Henry County, Tennessee. He excelled academically, graduating from high school at age fifteen and Tennessee State University at age nineteen, where he received his B.S. degree in elementary education. Jones went on to receive his M.Ed. degree from Tennessee State University and his Ed.D. degree from Vanderbilt University. He also graduated from Payne’s Theological Seminary with his Th.D. degree.

Jones taught elementary students in the St. Louis Public Schools from 1959 to 1965, and Nashville Metropolitan Schools from 1966 to 1968. He then became a textbook consultant for McGraw Hill Publishers and worked as an instructor at Tennessee State University from 1974 to 1986. As a teacher, Jones helped develop the idea for a Black Expo in Nashville, Tennessee. During that effort, he introduced the pilot for what became “Bobby Jones Gospel” to WSM-TV in Nashville. WSM-TV picked up the show and it ran in Nashville from 1976 to 1980. Jones also created, produced and hosted “Bobby Jones’ World,” a magazine-style show that ran from 1978 to 1984.

In 1980, Black Entertainment Television premie`red “Bobby Jones Gospel,” the longest continuously running original series on cable television, where Jones serves as host and executive producer. Jones then produced the show “Video Gospel,” which premiered on BET in 1986. He went on to produce and host a number of other shows, including The Word Television Network’s "Bobby Jones Gospel Classics" and "Bobby Jones Presents,” the BET Gospel Network’s "Let's Talk Church,” and The Gospel Channel’s “Gospel Vignettes” and “Bobby Jones Next Generation”. He has also hosted “The Bobby Jones Radio Show” and “The Bobby Jones Gospel Countdown,” which have aired on The Sheridan Gospel Radio Network. Jones has toured with the musical group, New Life; he oversees The Nashville Super Choir; and, for twenty-four years, was host of “The Dr. Bobby Jones International Gospel Industry Retreat.” He has opened his own production studio in Nashville, and is an instructor at Nova Southeastern University.

In 1980, Jones received the Gabriel Award and an International Film Festival Award for writing and performing Make A Joyful Noise, a black gospel opera which aired on PBS. In 1984, he won a Grammy Award for the Best Soul Gospel Performance By A Duo Or Group with Barbara Mandrell for "I'm So Glad I'm Standing Here Today." Jones has also received a Dove Award, three Stellar Awards, three Trumpet Awards, and a presidential commendation from President George W. Bush.

Bobby Jones was interviewed by The HistoryMakers on April 24, 2014.

See how Bobby Jones is related to other HistoryMakers
Click Here To Explore The Archive Today!