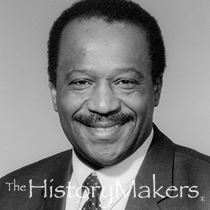 Favorite Color:
Blue
Favorite Food:
Cabbage
Favorite Time of Year:
Fall
Favorite Vacation Spot:
Negril, Jamaica
Favorite Quote:
To whom much is given, much is required.

Favorite Color:
Blue
Favorite Food:
Cabbage
Favorite Time of Year:
Fall
Favorite Vacation Spot:
Negril, Jamaica
Favorite Quote:
To whom much is given, much is required.

See how Bob Nash is related to other HistoryMakers
Donate Now

Businessman and government adviser Bob Nash was born on September 26, 1947 in Texarkana, Arkansas. After graduating from Washington High School, Nash attended the University of Arkansas, earning a B.A. degree in sociology in 1969. From there, he attended Howard University in Washington, D.C., earning his master’s degree in urban studies in 1972.

While attending night school at Howard, Nash worked for the City of Washington in the Deputy Mayor’s Office as a management analyst and later as an administrative assistant in the City Manager’s Office of Fairfax, Virginia. Upon completion of his M.A. degree, Nash went to work in the National Training and Development Service, serving as an administrative officer, and remained there for two years. Nash returned to Arkansas in 1974, working first at the state's Department of Planning before being hired by the Winthrop Rockefeller Foundation as vice president. There, he was responsible for rural economic development and grant management. In 1983, Nash was appointed by Governor Bill Clinton to serve as the senior executive assistant for economic development, and in 1989, he was appointed president of the Arkansas Development Finance Authority. Following Clinton’s election to the presidency, Nash was once again nominated for a position in his administration, first serving in the Department of Agriculture, and in 1995, he was named assistant to the president and director of presidential personnel. Today, Nash serves as vice chairman of ShoreBank Corporation in Chicago. ShoreBank operates banks, nonprofit and for-profit organizations and provides consulting services throughout the Midwest and eighteen foreign countries.

In addition to his governmental and private sector work, Nash is active with several organizations, including serving on the board of directors of the Urban League of Little Rock, Arkansas; Mercy Housing; and the Southern Center for International Studies. He also serves as the chairman of several of ShoreBank’s nonprofit ventures, such as the Neighborhood Institute and Enterprise Detroit and Cleveland. Nash and his wife, Janis, live in Chicago. He has two children from a previous marriage.

Nash was interviewed by The HistoryMakers on October 7, 2003.

See how Bob Nash is related to other HistoryMakers
Donate Now
Click Here To Explore The Archive Today!