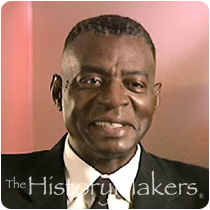 See how Bob Love is related to other HistoryMakers

Born in Delhi, Louisiana in 1943, Love was one of thirteen children. Throughout his childhood and most of his adult life, he suffered from a debilitating stutter. This handicap forced him to turn inward and dream of becoming a professional basketball player. As a child, Love nailed wire hangers shaped as hoops onto his grandmother's house and pretended some his competitors were some of the nations best. Love graduated from Moorehouse High School in Bastrop, Louisiana in 1961. After high school, Love attended Southern University in Baton Rouge where he received his degree in Food and Nutrition.

Following college, Love began his professional basketball career with the Cincinnati Royals. He was later traded to the Bucks, and then traded once again to the Chicago Bulls in 1968. During his eight seasons with the Bulls, he led in team scoring for seven years and was a three-time NBA All Star. He also holds the second highest scoring record in Bulls history with 12,623 points.

Love's basketball career ended as a result of a back injury in 1977. After that, his opportunities seemed limited. He tried for seven years to find steady employment but his stutter made it impossible. In 1984, he was hired as a dishwasher for $4.45 an hour. At the age of 45, in 1988, Love's life changed after meeting a speech therapist that helped him cure his stutter. In 1992, he returned to work with the Bulls as the Director of Community Affairs.

Bob Love, the man who once shied away from speaking in public, now gives motivational speeches to thousands of teens each year. His jersey was retired on January 14, 1994, but he is the proud recipient of the Individual Achievement Award from the National Council for Communicative Disorders and the Oscar Robertson Leadership Award, the NBA's highest award.

See how Bob Love is related to other HistoryMakers
Click Here To Explore The Archive Today!