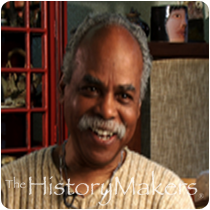 See how Bob Carter is related to other HistoryMakers

Robert Carter is a New York illustrator, painter, and art professor. Carter was born in Louisville, Kentucky, on March 29, 1938 to Robert and Sarah Carter. He graduated from Central High School in 1955 with an interest and talent for art. Continuing his education he received his B.S. degree from the University of Louisville in 1959 and his M.F.A. degree from the prestigious Pratt Institute of Fine Arts two years later. His first job was as an artist for WHAS-TV in Louisville where he painted scenery before being used as a set designer, fabricator, and finally as a floor director.

Carter’s art has been featured numerous times from Dallas to New York City. These include his exhibit “Carter Light” at Adelphi University and at the 1st Annual Harlem Fine Arts Show, both in 2010. In 2008, Carter was inducted as a legend into the Hall of Fame at Central High School in Louisville, Kentucky. Carter was also honored as an outstanding artist at the 10th Annual Celebration of Black Artists by the dedicators in New York. His website, Robert Carter Studio, created in 2006, acts as a portfolio for his work.

His wife, Panchita, is a fine art jeweler and together they have two daughters, Heather and Holly.

Robert Carter was interviewed by The HistoryMakers on April 27, 2010.

See how Bob Carter is related to other HistoryMakers
Click Here To Explore The Archive Today!