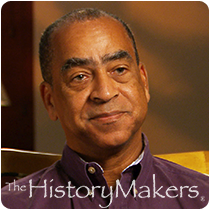 See how Bob Butler, Jr. is related to other HistoryMakers

Broadcast journalist Bob Butler was born on June 5, 1953 in Chelsea, Massachusetts. Butler grew up in a Navy family, and, as a child, he travelled throughout the United States. Butler attended St. Joseph-Notre Dame High School in Alameda, California, where he graduated in 1971. Before graduation he enlisted in the U.S. Navy. He served in Guantanamo Bay and Newport, Rhode Island before receiving an honorable discharge in Philadelphia in 1974.

In 1974, Butler moved to Washington, D.C. and then Pittsburgh, Pennsylvania, where he worked for Bell Telephone as a directory assistance operator while moonlighting as a disco deejay. In 1977, Butler returned to Hayward, California and studied at Chabot College where he also filled hourly newscasts at the campus station. Upon graduating from Chabot College in 1979, he briefly worked at Soulbeat Television; and, in 1980, was hired as a general assignment reporter at KDIA radio in Oakland, California.

Butler transferred to San Francisco State University and interned at KCBS radio in 1981. Shortly after, he was brought on as a desk assistant and then was hired on staff in 1982. Butler worked at the editor’s desk and became a fill-in reporter during the 1989 Loma Prieta earthquake where he covered a wide range of topics throughout the United States, including local and national politics, natural disasters, and general news.

Butler became the weekend morning reporter in September of 1999 and covered international stories in Brazil, Europe, and countries in Africa such as Namibia, Tanzania, and Senegal. In 2005, Butler was promoted to diversity director for CBS Corp. where he recruited diverse candidates for positions with the company’s radio and television stations. He left full-time employment at CBS in 2006, and was a lead reporter on the Chauncey Baily Project as an investigative reporter from 2007 to 2011.

Butler’s career includes leadership roles in various professional organizations. In 2000, Butler became a member for the National Association of Black Journalists (NABJ) and began mentoring college students on the radio projects in 2002. He was elected president of the Bay Area Black Journalists Association (BABJA) in 2004, where he served for five years. In 2007 Butler was elected as NABJ’s regional director. He was promoted to vice-president of broadcast in 2009, and was elected the 20th President on August 2, 2013.

Butler joined the San Francisco board of the American Federation of Television and Radio Artists (AFTRA) in 1999. He became a member of the inaugural national board when AFTRA and the Screen Actors Guild (SAG) merged in 2012, creating SAG-AFTRA.

Butler lives with his wife, Lois Butler, in the San Francisco Bay Area. They have one son, Robert Butler, III.

Bob Butler was interviewed by The HistoryMakers on November 6, 2013.

See how Bob Butler, Jr. is related to other HistoryMakers
Click Here To Explore The Archive Today!