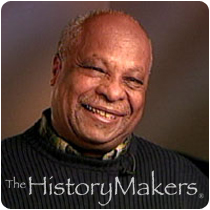 See how Bob Black is related to other HistoryMakers

Black started his career as a professional photographer in 1965, working at the Chicago Defender as a staff photographer. By the time Black joined the Defender, it had already established itself as the largest African American-owned newspaper in the nation, and had been fighting for full equality for African Americans since its inception in 1905. In 1968, Black left the Defender for the Chicago Sun-Times where he remains today as a photographer.

Black has been the recipient of numerous awards, including collecting first place at the World Press Photo Competition. He also actively pursues projects outside his work for the newspaper, including a series of photographs of life in the Dominican Republic and a series of photographs displayed along with other CAAAP members at the Chicago Museum of Contemporary Art.

See how Bob Black is related to other HistoryMakers
Click Here To Explore The Archive Today!