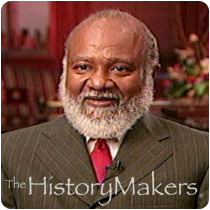 Favorite Color:
Blue
Favorite Food:
Steak (T-Bone Smothered)
Favorite Time of Year:
Fall
Favorite Vacation Spot:
Cruises
Favorite Quote:
Father, Nothing Is Going To Happen To Me Today That You and I Together Cannot Handle.

Favorite Color:
Blue
Favorite Food:
Steak (T-Bone Smothered)
Favorite Time of Year:
Fall
Favorite Vacation Spot:
Cruises
Favorite Quote:
Father, Nothing Is Going To Happen To Me Today That You and I Together Cannot Handle.

See how Bishop William L. Sheals is related to other HistoryMakers

Teacher, preacher and evangelist, Dr. William L. Sheals has been the Senior Pastor of Hopewell Baptist Church in Norcross, Georgia since 1980. He received a business degree from New York University and holds theological degrees from Florida Memorial Seminary and International Bible College.

Sheals' experience in the business world includes acting as the former Vice President of the Mortgage Department of Carver Federal Savings and Loan Association in Harlem, New York. Subsequently, he managed the branch office of Beneficial Financial Company in the Bronx and worked as a disc jockey, a concert promoter and an actor and director off-Broadway. In Florida, he served as the Assistant Director of the Lakeland Housing Authority while pursuing his advanced studies there. He moved to Atlanta in 1979 to work as the Assistant Director of the Atlanta Housing Authority, but left the position after ten years to devote himself entirely to the rapidly-growing Hopewell Baptist Church, which was founded by former slaves after the Civil War.

Under Sheals' direction since 1980, Hopewell has grown from a two-acre, one-building facility with 200 members to a thirty-acre campus called "The City of Hope," with a membership of nearly 17,000, including over 60 ministries and auxiliaries. The City of Hope includes a senior citizens facility, a 500-member youth church, a child development center, a Christian Academy that teachers pre-school through eighth grade and a Bible College.

Sheals' leadership and civic service has been honored with the Martin Luther King, Jr. Drum Major Award for Community Service (1999) the Civic Leader of the Year Award, Gwinnet County (1995) the African American Community Service Award (1994) the Outstanding Humanitarian Award, National Kidney Foundation (1988) and the Presidential "Special Citizen" Award for acting as Director of "Ministries Against Drugs" (1989). He is the founding President of the North Metro 100 Black Men and member of the United Way Special Committee, the Rotary Club, the Human Relations Commission and the Mayor's Advisory Council.

See how Bishop William L. Sheals is related to other HistoryMakers
Click Here To Explore The Archive Today!