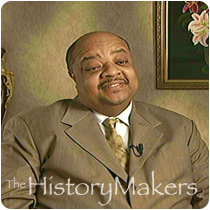 "If God Can Do Anything, God Can Do Everything. There Is Nothing Too Hard For God."

Bishop and pastor Sedgwick Daniels was born the second youngest of eight children on August 16, 1959 in Milwaukee, Wisconsin to John and Kathleen Daniels. He became City of Milwaukee Plan Commissioner and the first Protestant board member of the Catholic Central City Schools. Daniels joined Antonio Riley and the Wisconsin Housing and Economic Development Authority on several projects, assisting in developing a housing complex for seniors and developing Milwaukee home ownership.

In 2001, Daniels was elevated to the role of Bishop by Bishop Gilbert E. Patterson and the Church of God in Christ General Board. Daniels’ jurisdiction covered more than 105 Institutional Church of God churches in Wisconsin and northern Illinois. During Daniels’ tenure as Bishop, his own church, Holy Redeemer Institutional Church of God in Christ, became a multi-million dollar operation that addressed both the educational and social service needs in the Milwaukee community.

Bishop Sedgwick Daniels was interviewed by The HistoryMakers on November 28, 2007.